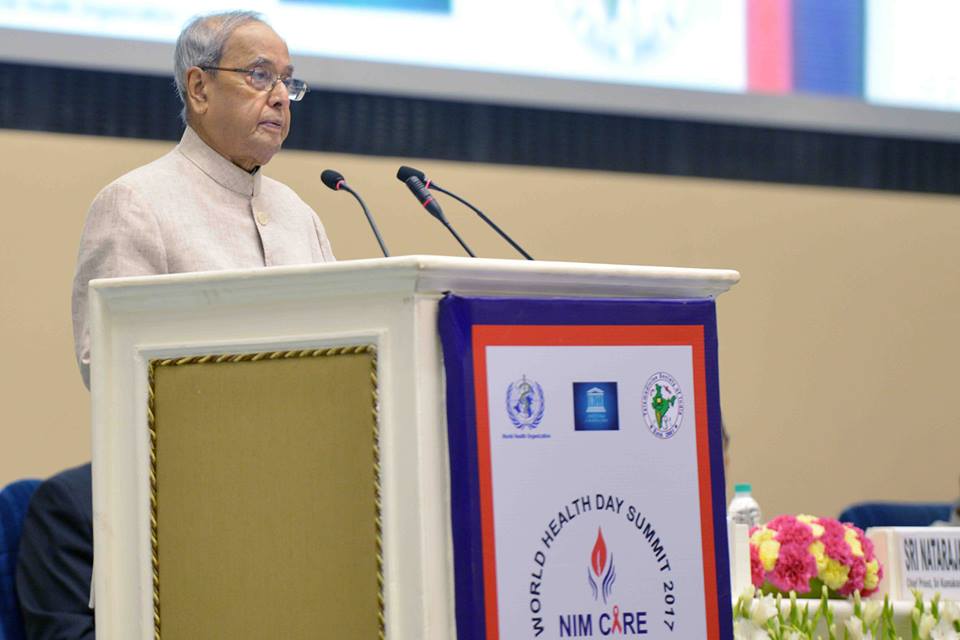 Speaking on the occasion, the President said that he was happy that NIMCARE has taken the lead in organizing this Conference on World Health Day. The slogan of the first NIMCARE World Health Day Summit is, ‘Unite for a Healthy Mind’. He stated that lack of mental well-being contributes significantly to the total disability and morbidity burden across the world. Productivity of human beings, whether in workforce or in family situations, gets reduced significantly if one has any mental disorder. Mental health disorders span a very wide range from simple disorders to very complex situations. It is often seen that simpler disorders, if not managed in time, tend to become more complex putting the patient at higher risk of morbidity. Such patients often become a bigger burden on the families.

The President said that out of all the mental health disorders, depression is probably the most common. Depression affects people of all ages from all walks of life and in all countries. As per the National Mental Health Survey 2015-16 conducted by NIMHANS, 5.2% of the Indian adult population suffers from depression in some form or the other. The problem of depression often gets ignored due to lack of understanding on the part of family members. The social stigma attached to a mental disorder, even if it is easily treatable, is also a major problem in India. However, people have now started talking about this issue leading to greater awareness in this respect. He pointed out that traditional Indian values along with our family system, can be good mechanisms to support those who suffer from mental health disorders. He urged medical practitioners to focus on the social support systems, spiritual beliefs and practices as well as the system of Yoga in their quest for providing well-being to all.

The President said that there is a severe shortage of mental health professionals in India and this service gap can be bridged effectively by telemedicine. The World Health Day Summit has begun in the right direction by launching the eCAP & SOL’s Telepsychiatry application for the rural and urban population in need of mental health consultation. He urged all to strive to make even greater progress in the efforts to create awareness about depression and focus on further strengthening our health care delivery systems.