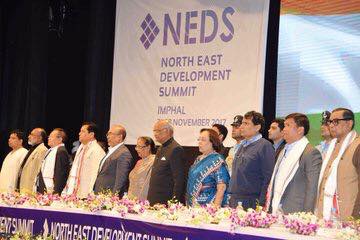 Speaking on the occasion, the President said that the Northeast is an amazing social and cultural ecosystem. Few regions of the world have such a wealth of cultural, ethnic and religious diversity packed into such a small area. This variety is an inspiration for all of us. The Northeast is home to some of the oldest indigenous communities in the world. It is one of our spiritual homelands. Whether it is the traditions of the Devi in Kamakhya or of Buddhism in Tawang and elsewhere, they make for a sacred bond that unites India with Southeast Asia. Christian missionaries have contributed to education in this region. And there is even a small but thriving Jewish community in Manipur and Mizoram.

The President said that the Northeast’s geographical location makes it the obvious gateway to India, linking the vast economies of the Indian subcontinent and of today’s ASEAN countries. This is the potential we have to tap. And this is the idea that must inspire this Summit.

The President said that central to the Government of India’s approach to the development of the Northeast is an urgent and speedy enhancement of connectivity. This is a multi-modal programme, across land, water and air. And it refers both to connectivity within India as well as to connectivity between India and its eastern and Southeast Asian neighbours.

Later in the day, the President graced and addressed the inaugural event of ‘Manipur Sangai Festival 2017’ in Imphal.

Addressing the gathering, the President said that he was happy to inaugurate the Sangai Festivalwhich is the perfect showcase for the cultural diversity and richness of Manipur, comprising its various communities and beautiful social fabric. The food and culture, adventure sports and crafts, handlooms and universally-admired dance forms of Manipur cannot find a more appropriate setting. Manipur’s cultural traditions, its social, religious and ethnic mosaic, and its history of courage and resilience are an inspiration for everybody in India.

The President paid tributes to the martyrs of 1891 and said that these heroes will always be remembered for their contribution to the cause of our freedom and human liberty. For every Indian the great Bir Tikendrajit and his comrades are cherished icons.

The President said that a favourite – not just his favourite; our favourite, the whole country’s favourite – is the magnificent Mary Kom, Manipur’s very own Olympic medallist. He recalled his tweet after she won the gold medal in the Asian Boxing Championship recently, “You make us prouder with every punch.”

The President called Manipur the heartland of Indian football. In the Under-17 World Cup hosted by India, our inexperienced but determined boys put up a fighting show – and eight of the 21 members of our national team were from Manipur. This list included the captain Amarjit Singh Kiyam and the gallant goal-keeper Dheeraj Singh Moirangthem.