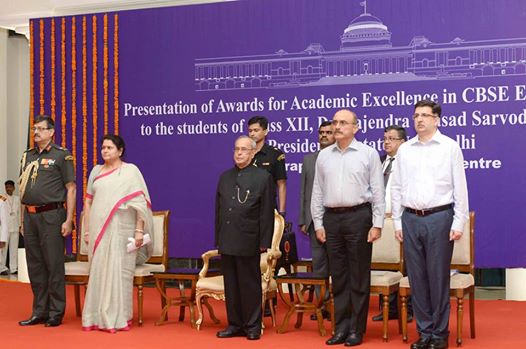 New Delhi: The President of India, Shri Pranab Mukherjee presented the ‘Pranab Mukherjee Award for Academic Excellence’ to Shri Aman Aggarwal for scoring the highest aggregate in Class XII CBSE Examination, 2017 among the students of Dr. Rajendra Prasad Sarvodaya Vidyalaya located in the President’s Estate today (July 19, 2017) at Rashtrapati Bhavan. On the occasion, Both the ‘Omita Paul Award for Academic Excellence’ for scoring highest aggregate marks amongst girls in Class XII CBSE Examination, 2017 as well as the ‘Kunjannamma Mathew Award’ for Academic Excellence’ for scoring highest marks in Mathematics amongst the girls in Class XII CBSE Examination, 2017 were presented to Kumari Muskan Sharma by Smt. Omita Paul, Secretary to the President and Dr. Thomas Mathew, Additional Secretary to the President respectively.

Speaking on the occasion, the President congratulated the award winners and urged them to strive for excellence in every walk of life. Referring to a poem by Nobel Laureate Rabindranath Tagore, the President said that students must always remember that service is joy. The President stated that he cherished the occasions when he had taken a class of young students of Dr. Rajendra Prasad Sarvodaya Vidyalaya on Teachers’ Day during the last two years. Children are the future of the nation and when he looked at their bright faces and gleaming eyes he felt confident that they will take the country in the right direction in future. He said that they would get a chance to serve this great country in various walks of life. Though a vast and diverse country, India has an underlying unity. He said that he was sure that the children would meet the expectations of their parents, friends and neighbours.

Secretary to the President, Smt. Omita Paul said that in the last five years under the inspirational guidance of the President constant efforts had been made towards his vision of upgradation of educational infrastructure and quality in the country. She emphasized that children must retain their inquisitive minds and search for new solutions to problems. She also urged teachers to keep a questioning mind alive in a child since it was the path to creativity and innovation.