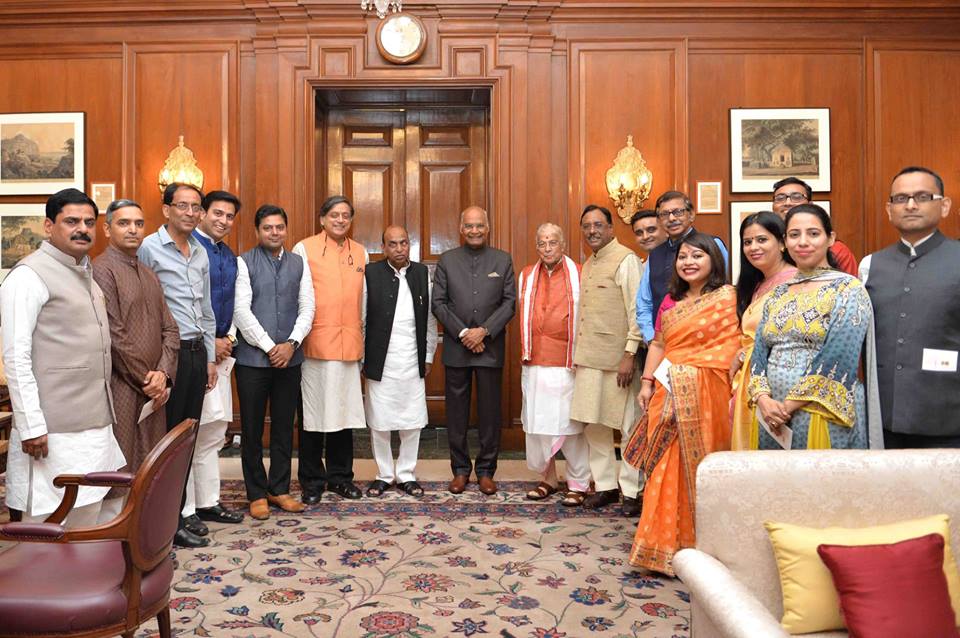 New Delhi: The President of India, Shri Ram Nath Kovind, received a copy of a special issue of the ‘Think India’ journal, devoted to the late philosopher-politician Deendayal Upadhyay, at Rashtrapati Bhavan today (April 2, 2018). The copy was given to the President by Dr Murli Manohar Joshi, MP, in the presence of Shri D P Tripathi, MP, and editor of the special issue. Among others Dr Shashi Tharoor, MP, and Shri Pawan Verma, former MP, were also present.

Speaking on the occasion, the President said that Deendayal Upadhyay remains an important national figure who enriched Indian politics and public thought with his writings and ideas. There is need for a broader consciousness as well as a need to rise above party politics to evaluate him and his work. The President said he considers the special issue of the journal an attempt in this direction. The compilation of articles of writers belonging to different generations, political parties and persuasions is commendable. The President appreciated Shri D. P. Tripathi for putting together this special issue.

The President said that Deendayal Upadhyay advocated cooperation in the interests of the nation, and sought to place the developmental process above narrow partisanship. Mahatma Gandhi, Dr B.R. Ambedkar, Dr Ram Manohar Lohia and the late Deendayal Upadhyay carried forward Indian thought and kept it relevant to grassroots development. Along with formulating ideas, these eminent personalities worked on the ground and had practical achievements. In the same vein, Jawaharlal Nehru’s book ‘Discovery of India’ was also an important attempt to understand India’s philosophical and cultural traditions.

Despite conceptual distinctions, the President said, a certain unity and ethos is the hallmark of India. In this compilation, efforts have been made to understand Deendayal Upadhyay’s contributions through this prism.