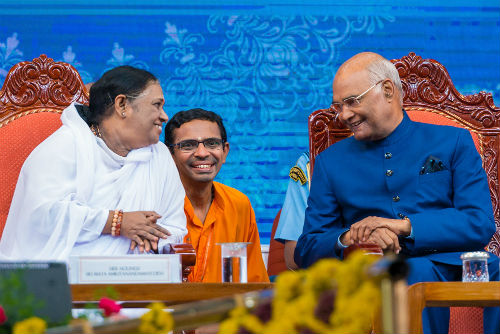 Kollam, Kerala: At a function held today at the Mata Amritanandamayi Math in Kollam, Honourable President Shri Ram Nath Kovind launched a new charitable initiative through which the Math aims to provide filtration for clean drinking water to one crore [10 million] villagers throughout the nation. The initiative was inaugurated in the presence of Sri Mata Amritanandamayi Devi (Amma). Also present on the dais were the Honourable Governor of Kerala, Justice P. Sathasivam; Honourable Minister for Devaswom, Tourism & Cooperation, Sri. Kadakampally Surendran; Sri. K.C. Venugopal, MP and All India Congress Committee Secretary; and Sri. R. Ramachandran, MLA.

The initial phase of the project — which aims to install “Jivamritam” filtration systems for clean drinking water in 5,000 villages throughout the nation — is being completely funded by the Mata Amritanandamayi Math, at an expectant cost of Rs. 100 crore [$15.27 Million U.S.]. Each Jivamritam System can filter the daily drinking-water needs of up to 400 five-member families, potentially providing safe and clean drinking water to one crore villagers.

Speaking on the occasion, Honorable President Shri Ram Nath Kovind said: “Kerala has been one of the leading spiritual homes of our country. The fame of spiritualism has shone bright in the state for thousands of years, with such revered people as Adi Shankaracharya, Sri Narayan Guru, and Ayyankali. They did much to unite our country with a common sense of spiritualism and push for social reform. Mata Amritanandamayi represents this enlightened spiritual tradition of Kerala. She sees her spiritual mission as a contribution to nation building. Spiritualism challenges us to raise the quality of human consciousness as well as the quality of life of every human being. The projects of the Math that are being initiated today do just that. They aim to provide clean drinking water in 5,000 villages across the country, and they strive to make villages Open Defecation Free. Such initiatives promote the health and well-being of common people, and are reflective of both the spiritualism and the progressive ideals of Kerala – as embodied by Amma. Above all, such initiatives help build a better society and a happier nation.”

The Jivamritam System was conceptualized and designed by faculty and students of the Math’s five-campus university, Amrita Vishwa Vidyapeetham (Amrita University). The Math intends to deploy all 5,000 Jivamritam Systems within one year, provided there is timely permissions from local administrations.

The Jivamritam Systems will be a Godsend. According to WaterAid India, approximately 7.6 crore people [76 million] in India lack access to clean drinking water[1], and more than 60,000 children, five and under, die each year in India from diarrheal diseases caused by drinking impure water and poor sanitation.[2] And according UNICEF India, 67% of Indian households do not treat their drinking water, even though it could be contaminated with harmful bacteria and chemicals.[3]

“The Jivamritam System avails of a dual sand-and-activated-carbon filter to remove suspended particles and turbidity, followed by micron filters of five-micron and one-micron filtration,” said Dr. Maneesha Sudheer, the Jivamritam project head from Amrita University. “Each system also includes an ultraviolet water-purifier to remove pathogenic contamination, and two storage tanks — 2,000-litre-inlet and a 1,000-litre outlet — to keep treated and untreated water separate. The filtered-water tanks are integrated with taps to provide drinking water at the location of the system itself.”

Dr. Maneesha added that the Jivamritam System would be modular. “The water available in every village is different, and some may have different needs,” she said. “This is the first module, with variations to come as needed.”

President Kovind inaugurated Jivamritam in the presence of spiritual leader and humanitarian Sri Mata Amritanandamayi Devi (Amma) by unveiling a model system to thousands of devotees who had gathered for the occasion. The President, Amma and the gathered devotees, then watched a Jivamritam System provide clean water to villagers in Clappana, Kollam, via a live-stream connection.

President Kovind also participated in two other charitable initiatives of the Math — specifically, the bestowing of certificates to 1,940 totally free surgeries at the Amrita Institute of Medical Sciences & Research Center in Kochi, and the distribution of certificates verifying that 12 villages adopted by the Math have been declared Open Defecation Free.

The second event of the programme found President Kovind presenting three village leaders with certificates verifying their respective villages as Open Defecation Free (ODF) by Swacch Bharat Abhiyan. An ODF village is one wherein all households have access to a toilet and no human waste or sewage pollutes the village surroundings.

In many of these villages, it has been the women who have built the toilets themselves after being trained by the Math in plumbing and masonry, etc. “Now, instead of their normal unskilled labor, they are challenging gender stereotypes and seeking work as skilled workers instead,” said Prof. Bhavani.

“These villages are an inspiration to the other villages we work in,” she added. “We expect many more of the Math’s adopted villages to become ODF-verified by the end of the year. In fact, this effort is just the beginning. The women in most of these villages now have set a new goal — attaining ‘Nirmal Gaon’ status, which comes only when all the villages in their district become ODF.”

The final event of the programme involved President Kovind presenting certificates for totally free surgeries at the Amrita Institute of Medical Sciences (Amrita Hospital) to five onstage beneficiaries. These five individuals were representative of 1,940 economically challenged people receiving such certificates — including 200 recipients of heart surgeries, 70 of neuro surgeries, 20 of kidney transplants, 50 of head-and-neck surgeries, 50 of major gastrointestinal surgeries, 50 of urological and nephrological surgeries, 500 of dialysis treatments and 1,000 of cancer treatments.

“Since the inception of the Amrita Institute of Medical Sciences in Kochi and the allied medical institutions of the Mata Amritanandamayi Math have provided totally free medical care to more than 43.3 lakh [4.33 millions] patients,” said Dr. Prem Nair, the Amrita Hospital’s Medical Director. “During that time, more than Rs. 622.53 Crore [$95 million U.S.] in charitable care has been provided.”

Sri Mata Amritanandamayi Devi (Amma)
Amma has delivered addresses at the United Nations several times and has spoken twice at the Parliament of the World’s Religions. Among other accolades, she has received the Gandhi-King Award for Non-violence in Geneva, the James Parks Morton Interfaith Award in New York, and an honorary doctorate from the State University of New York. In 2014, at the invitation of His Holiness Pope Francis, Amma was one of 12 religious and spiritual leaders to travel to the Vatican to sign a joint declaration against modern slavery. Throughout her life, Amma has embraced and comforted more than 3.7 crore people. When asked where she gets the energy to help so many people while also building and running a massive humanitarian organization, Amma answers: “Where there is true love, everything is effortless. Love transforms.”