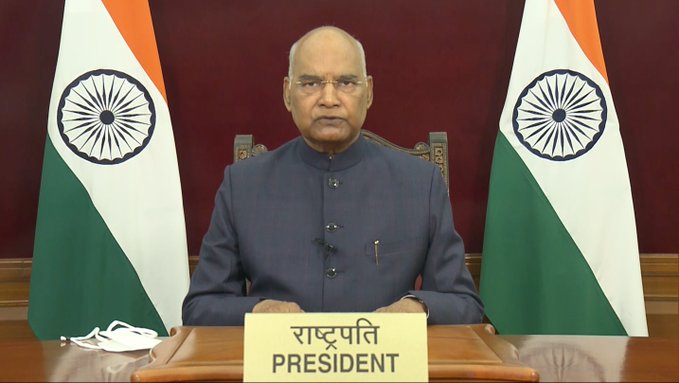 Appreciating the organisers for naming the venue of the Conference after Bharat Ratna Lata Mangeshkar, the President said that such a meaningful use of the name of Lata ji who has given a timeless legacy to the culture of India and Maharashtra, is appropriate.

Pointing to the fact that Maharashtra Udayagiri Mahavidyalaya of the Maharashtra Education Society is marking its Diamond Jubilee this year, the President congratulated the entire team of the college for making continuous contribution in the field of education for past sixty years. Noting that the college was established by the farmers and traders of Udgir region with their hard-earned money, he said that society and nation progress only with such extraordinary contribution of ordinary citizens. He said that we should gratefully remember the contribution of founders on this occasion.

Remembering the literary contributions of Mahatma Jyotiba Phule and Dr BR Ambedkar, the President said that Mahatma Jyotiba Phule wrote revolutionary books like ‘Gulamgiri’ and ‘Tritiya Ratna’. The play ‘Tritiya Ratna’ is considered as an important work of social theatre. Babasaheb Ambedkar enriched the thinking of Maharashtra as well as whole country with the ideals of modernity and equality through his publications like ‘Bahishkrit Bharat’ and ‘Mooknayak’. On that egalitarian ideology and spirit, talented writers of the deprived classes, in modern era, have composed literature in Marathi which is called Dalit literature.

The President said that equality and valour are the identity of Maharashtra. In the 17th century, by flowing the streams of bravery and knowledge, Chhatrapati Shivaji Maharaj, Samarth Guru Ramdas and Sant Tukaram, endowed Marathi identity and literature with extraordinary splendour which created a new self-respect in India.

Speaking about valuable and extraordinary contributions of women-power in Maharashtra, the President remembered Queen Naganika of Satavahana dynasty who lead her empire after the untimely demise of her husband; Veermata Jijabai who had not only built the character and personality of her son Veer Shivaji but also gave new heights to the Maratha pride through her able leadership; Janabai who composed a number of musical abhangas challenging caste and gender-based discrimination in the 14th century; Baija Bai who fought against British 40 years before the struggle of 1857. He also mentioned the contributions of Savitribai Phule, Sagunabai Kshirsagar, Fatima Shaikh, Mukta Salve and Tarabai Shinde to society, literature and education in 19th century’s Maharashtra. He said that Tarabai Shinde wrote a book ‘Stree-Purush Tulna’ in the year 1882 which is considered to be the first article written on the topic of women’s liberation in India. He said that the example of Dr. Anandibai Joshi who was among the first women of India to become a doctor, gives an introduction to a progressive society. In the 20th century, social workers like Pramila Tai Medhe have contributed nationwide.

The President said it is a matter of concern that the women of Maharashtra, who have been leading since ancient times in the fields of politics, social reform, thinking and literature, are lagging behind today. He noted that according to the 2011 census, Maharashtra was ranked 14th in terms of female literacy and 22nd on the sex-ratio parameter. He urged progressive citizens participating in the Literary Conference to take a pledge to encourage women to take lead in areas like health, education and literature.

iednewsdesk Apr 26, 2022
The University of Birmingham has created a new spinout, Healome Therapeutics Ltd, to commercially deploy a…