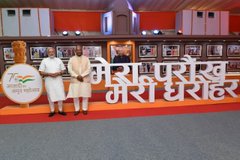 President of India along with the Prime Minister visits Pathri Mata Mandir and Milan Kendra; pays tributes at the statue of Dr BR Ambedkar

Speaking on the occasion, the President thanked Prime Minister, Shri Narendra Modi for accepting his invitation to come at his native village. He said that not only his village, his district was also touched by his gracious presence.

‘Success of Indian diaspora around the world is a source of…

PM Modi attends the Ground Breaking Ceremony @3.0 of the UP…

The President said that the Prime Minister is constantly striving to make the life of every citizen easy. He has given new dimensions to the meaning of serving Mother India. He has also given new meaning to the concept of national service and public welfare.

He said that as we all know Babasaheb struggled throughout his life for building an inclusive and harmonious society based on Indian culture and for upliftment of the poor, backward and deprived sections of the society. He said that the manner in which the Prime Minister has implemented Babasaheb’s ideals is exemplary for all of us.

Referring the Prime Minister’s address during his Japan visit where he said, “he likes to draw lines not on butter but on stones”, the President said that this firmness of Prime Minister’s character is establishing India as a might on the world stage today. On the strength of his extraordinary effort and hard work, he has given grandeur to the pride and dignity of the nation. All of us are proud of such a son of Mother India.

‘Success of Indian diaspora around the world is a source of pride for us’: Vice President

‘Success of Indian diaspora around the world is a source of pride for us’: Vice…