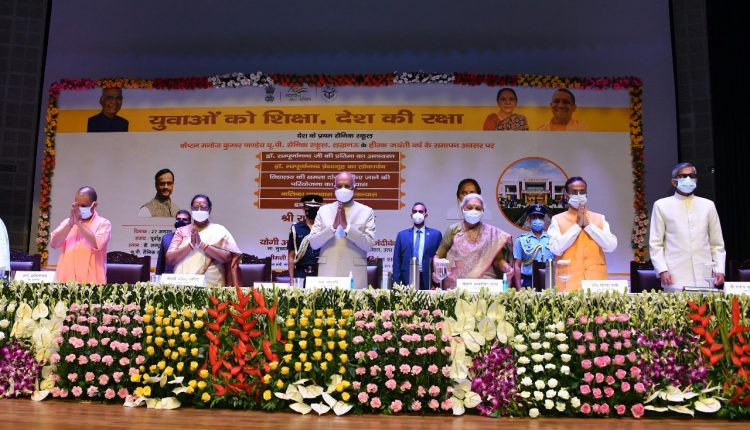 New Delhi: President of India, Shri Ram Nath Kovind graced and addressed the concluding ceremony of the Diamond Jubilee celebrations of the Captain Manoj Kumar Pandey U.P. Sainik School in Lucknow today (August 27, 2021). On the occasion, he also unveiled the statue of Dr Sampurnanand, former Chief Minister of Uttar Pradesh; inaugurated an Auditorium named after Dr Sampurnanand; and laid foundation stones for projects regarding doubling the capacity of the School and a hostel for girls in the School.

Remembering Captain Manoj Kumar Pandey, the President said that we would always be indebted to him and his family for his sacrifice to protect the borders of the nation. Captain Manoj Kumar Pandey has written a wonderful and immortal saga of valor and sacrifice. He is the only soldier among the students of all Sainik Schools who has been decorated with the Param Vir Chakra.

Remembering Dr Sampurnanand, the President said that when India became independent, freedom fighters like him thought of preparing such generations who could protect the priceless freedom achieved after a long struggle and build a good society. According to him where there is knowledge, there is power. In his view, there should be curiosity in the mind and humbleness in the heart of students.

The President said that personalities like Dr Sampurnanand and Captain Manoj Kumar Pandey have a common ideal. That ideal is the spirit of dedicating everything for the sake of the nation’s pride. The President expressed confidence that keeping such ideals in mind, students and teachers of this School would further enhance the prestige of this Sainik School and write glorious chapters in the service of the nation.

Speaking about the traffic restrictions during the VVIP movements that cause discomfort to people, the President said that apart from being the President of India, he is a sensitive citizen too. He said that the restrictions be enforced in a manner as to cause minimum disruption in normal traffic. He urged the administration to devise a way to enforce restrictions not beyond 15-20 minutes for VVIP movements and let emergency vehicles like ambulance be given passage even at the time of such restrictions. He also appealed people to follow the traffic rules and cooperate with the administration in maintaining traffic discipline.