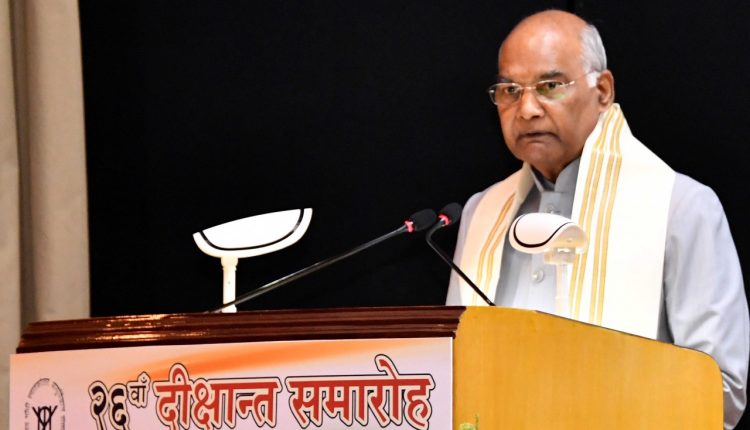 SGPGIMS should Expand its Influence all over the State and Handhold Medical Colleges and Hospitals which Lag Behind in Specialised Medical Care: President Kovind

New Delhi: SGPGIMS has earned respect for pursuing excellence not only in medical research but also for giving top class tertiary healthcare to patients. Now the time has come for SGPGIMS to expand its influence all over the state and handhold medical colleges and hospitals which lag behind in specialised medical care, said the President of India, Shri Ram Nath Kovind. He was addressing the 26th convocation of the Sanjay Gandhi Postgraduate Institute of Medical Sciences in Lucknow today (August 27, 2021).

Referring to the Chief Minister of Uttar Pradesh’s announcement of setting up of medical college and associated hospital in every district of Uttar Pradesh, he said that it is incumbent upon SGPGIMS to extend it’s expertise to all these upcoming institutes so that they can be developed as centres of excellence in their own way. This would help people get best treatment within the state.

The President said that in less than four decades, the Sanjay Gandhi Postgraduate Institute of Medical Sciences has lived up to its motto which says, “Research enhances vitality of teaching, teaching lifts the standards of service and service opens new avenues of investigation.” This institute has excelled, raised the teaching standards, explored new avenues in research and carried out breakthrough research in medical science. He noted that SGPGIMS holds fifth spot in the medical category in the country in the recent NIRF ranking. He congratulated all members of the Institute family, both past and present, whose commitment and hard work is behind this phenomenal success. He also noted that this institute has shown immense commitment towards the National and State Organ Transplant Programme. He said that SGPGIMS has contributed greatly in raising awareness for a cause that has been saving numerous lives.

Speaking about the Covid-19, the President said that the world continues to grapple with this pandemic. In our fight against the coronavirus, medical institutions like SGPGIMS have worked relentlessly. He appreciated the untiring efforts of all doctors, nurses, medical students, healthcare and sanitation workers and administrators. He said that they have risen to the challenge and selflessly served fellow citizens. They risked their own life; some of the fellow corona warriors also sacrificed their lives. The entire nation is grateful to them for their dedication.

The President said that the battle against Covid-19 is far from over. We must remain on guard against any laxity. Masks and social distance are our first line of defence. And the vaccine is the best possible protection offered by science. True to the vision of ‘Atmanirbhar Bharat’, our scientists have produced ‘Made-in-India’ vaccines. With the collective efforts of our doctors, healthcare workers and administrators, the nation has been conducting the world’s largest vaccination drive. We have made incredible progress with more than 61 crore citizens have been successfully vaccinated across the country. He noted that in Uttar Pradesh, the most populous state of the country, nearly 6 crore 70 lakh people have been vaccinated so far. He said that we are making progress on vaccination but our work is far from over. We have a long way to go and we cannot rest till every eligible individual is vaccinated. He urged all to keep contributing to raise awareness about vaccination.

The President said that the pandemic has underlined the importance of healthcare in the most unprecedented way. There is a challenge to fulfil the healthcare requirements of all citizens, including the less privileged and those living in interior areas. In this regard, the use of the latest technologies and especially telemedicine will go a long way. He said that technological solutions would have to be complemented by various forms of therapy too. India has a rich knowledge base in healthcare in the form of Ayurveda. Along with other traditional forms of medicine as well as yoga, it can help treat lifestyle diseases. He stated that even more important than method and technology is the human element, that is, the healer. That is where doctors come in.

Addressing the graduating doctors, the President said that they have acquired great skills and knowledge; now is the time to put them to use in serving others. For those patient hoping for relief and recovery, doctors are nothing less than angels. Their faith puts greater responsibility on doctors to live up to patients’ expectations.