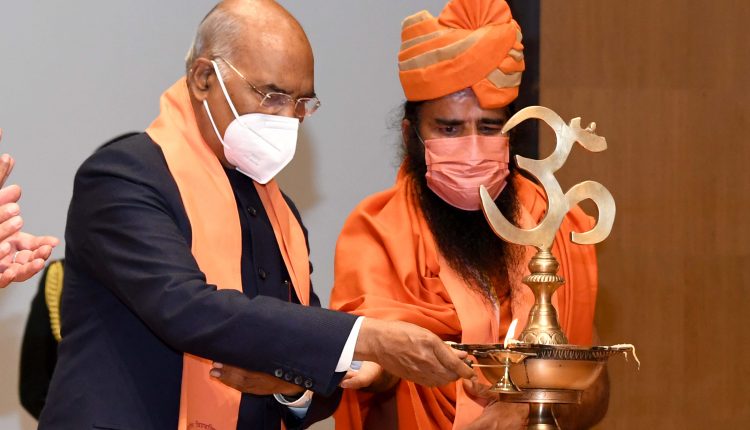 New Delhi: The President of India, Shri Ram Nath Kovind graced and addressed the first convocation of the University of Patanjali in Haridwar today (November 28, 2021).

Speaking on the occasion, the President said that Swami Ramdev has made immense contribution in popularizing yoga. He has benefited countless common people by associating them with yoga practices. The President pointed that some people have a misconception that yoga is associated with a particular sect or religion but it is not like that at all. In true sense, yoga is a method of keeping the body and mind healthy. That is why yoga has been adopted by people from all walks of life and ideology across the world. He recalled that he had celebrated International Yoga Day along with his Surinamese counterpart in 2018 during his state visit to Suriname. He also recalled that founder of the Arab Yoga Foundation, Ms Nouf Marwaai had been conferred with Padma Shri in 2018 for her contribution in the field of yoga. He said that according to his belief yoga is for everyone, yoga is of everyone.

The President said that modern medical science has made amazing progress in the field of treatment with the help of many tools. However, Ayurveda and Yoga-science have deeply contemplated and researched the best tool developed by the universe i.e. the human body. And through the body itself, it has developed effective ways of treatment. He said that harmonious association of human with the nature is the goal of Ayurveda and Yoga. And for this harmony, it is necessary that all of us adopt a lifestyle according to nature and do not violate the natural laws. Use natural products would be beneficial for all.

The President said that University of Patanjali is preparing the future generation for nation-building by giving them education based on the idea of indigenous entrepreneurship and employment generation. He was happy to note that in Patanjali Group of Institutions ‘enterprises based on Indianess’ and ‘Indianess based on enterprise’ is developing.

The President noted that University of Patanjali is marching on the path set by the National Education Policy to make India a ‘Knowledge Super Power’ by combining our relevant traditional knowledge with the modern science. He said that efforts made by this university would help Indian knowledge-science, especially Ayurveda and Yoga to attain a prime place on the world stage in modern perspective.

The President was happy to note that University of Patanjali has established a special cell for international students. He said that through this initiative the Indian values and knowledge tradition can be spread across the world. And this would be a special contribution of this university in the rise of New India of the 21st century.

Pointing to the fact that number of female students are more than male students in the University of Patanjali, the President said that it is a matter of happiness that our daughters are playing a leading role in spreading modern education based on tradition. He expressed confidence that Gargi, Maitreyi, Apala, Romasha and Lopamudra of modern age would emerge out of these girl students who would establish the supremacy of Indian wisdom on the world stage.