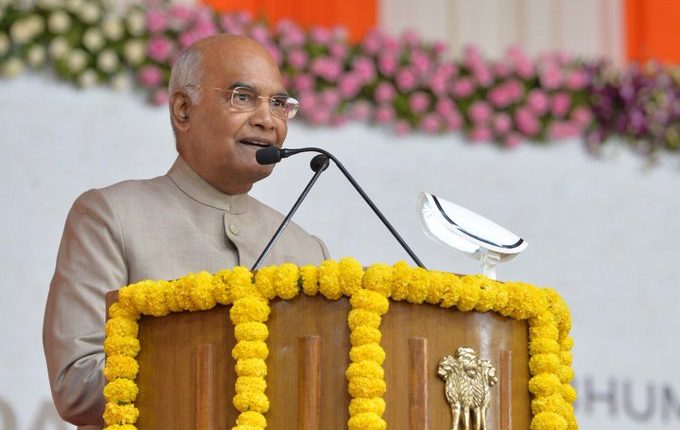 President of India in Uttar Pradesh; Graces the Vanvasi Samagam and Inaugurates the Newly Constructed Buildings of Seva Kunj Ashram at Chapki, Sonbhadra

New Delhi: It should be our endeavour that forest dwellers remain an integral part of the modern development process while keeping their cultural heritage and identity intact, said the President of India, Shri Ram Nath Kovind. He was addressing a gathering at Chapki, Sonbhadra, Uttar Pradesh today (March 14, 2021) on the occasion of inauguration of newly constructed buildings of Seva Kunj Ashram.

Remembering Bhagwan Birsa Munda on the occasion, the President said that Birsa Munda struggled relentlessly to protect the forest wealth and culture from the exploitation of the British. His life has been a source of inspiration and ideal not only for the tribal communities but for all citizens also.

The President appreciated the fact that the forest dwellers are keeping alive the tradition of intuitive knowledge received from their ancestors and carrying it forward. From agriculture to art and craft, the harmony they have with nature impresses everyone.

The President said he was confident that the Sonbhadra region connecting eastern Uttar Pradesh with Jharkhand, Chhattisgarh, Bihar and Madhya Pradesh will become a major center of modern development. He said that it should be our endeavour that forest dwellers remain an integral part of the modern development process while keeping their cultural heritage and identity intact.

The President was happy to note that efforts are being made by the ‘Sewa Samarpan Sansthan’ to revive the dwindling folk arts and preserving the folk languages and songs.