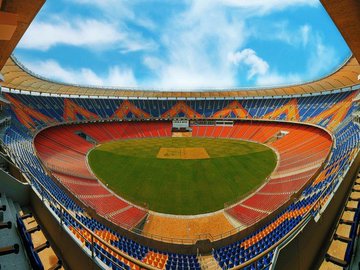 Ahmedabad: It is a matter of pride for us that the Narendra Modi Cricket Stadium has become the world’s largest cricket stadium with a capacity of 1.32 lakh spectators, said the President of India, Shri Ram Nath Kovind at the inauguration of the Narendra Modi Cricket Stadium and laid the foundation stone of the Sardar Vallabhbhai Patel Sports Enclave in Ahmedabad today (February 24, 2021). He noted that the stadium was not only the largest in the world but also provides world-class facilities for various sporting activities. He congratulated all officials, agencies and partners of the Gujarat Cricket Association, who were instrumental in giving the present shape to Narendra Modi Stadium. Appreciating the attributes of this Stadium, the President opined that with a gold rating of green-building certification, it is also a good example of eco-friendly development. The stadium showcases the aspirations and capabilities of the New India that has made a strong mark on the world stage. The President said that the dominance that India has achieved in cricket reinforces the belief that not only in other sports but also in the areas of development, our country has potential to achieve a higher position in the world.

The President said that India is called ‘Power House of Cricket’ or ‘Hub of Cricket’. Therefore, it is quite appropriate that the world’s largest cricket stadium is also now in our country. He appreciated the efforts put in building this stadium which was started under the guidance of the then Chief Minister of Gujarat, Shri Narendra Modi and then efficiently followed up by Shri Amit Shah as Chairman of Gujarat Cricket Association.

The President observed that many of our young cricketers, coming from small villages and cities of Indian hinterland, are gradually emerging as significant sporting talents on the strength of their hard work. Our youth also have the capability to perform well in other sports on international levels. For this to materialize, we have to provide world class infrastructure to them just as the way we provide for cricket. With this objective, it is significant that the Government of Gujarat has taken the initiative to build an international level sports enclave within the premises of the Narendra Modi Stadium. He noted that this sports enclave would work as a multi-sports venue and also provide facilities for hosting national and international events. He expressed confidence that this sports enclave would bring a new identity to the city of Ahmedabad in terms of sports infrastructure.

The President said that while the development of sports facilities is significant, it is also imperative that talented players in greater number take advantage of these facilities. Facility and access to facility both are necessary for wholesome development of our sports talent. Many promising players, living in remote areas, do not get the opportunity to show their talent due to financial constraint or due to other obstacles. Efforts are being made to provide facilities to young players. Taking such efforts forward on a more comprehensive level would provide an opportunity to nurture the hidden sporting talents in our country. Such endeavours are important for not just nurturing talent but also for overall development of the youth. Besides being index for development of a country, it develops team spirit, healthy competition and identification of national goals as personal goals. These are helpful in character development of the young generation, in turn promoting social and national development.

The President said that the Prime Minister, Shri Narendra Modi gave a lot of encouragement to sports in Gujarat during his tenure as Chief Minister. The President said that a new culture of sports is being developed by the Central Government throughout the country. Campaigns like ‘Khelo-India’ and ‘Fit-India’ are creating a trend towards encouraging good health and sports among the people. Efforts are being made to register India’s impressive presence in the sporting world with programs like ‘Target Olympic Podium Scheme’. He extended his wishes to the Indian and English teams playing cricket today at the newly inaugurated stadium.