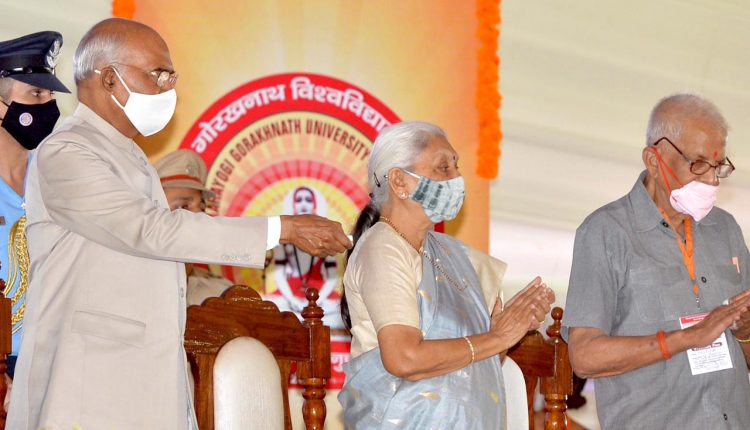 President of India Inaugurates The Mahayogi Gorakhnath Vishwavidyalaya at Gorakhpur

Speaking on the occasion, the President said that India has a glorious history in higher education. From the world’s first university at Taxila to the universities of Nalanda, Udantapuri, Vikramshila and Vallabhi, the tradition had faded for some time. But, our scientists, doctors and teachers have continuously influenced the world with their intellect and dedication. They have instilled in all of us confidence that our students are capable of carrying forward our ancient tradition of knowledge. He expressed confidence that the Mahayogi Gorakhnath University would prepare such knowledgeable students who would contribute in building a self-reliant, strong and healthy India.

The President said that the National Education Policy 2020 envisages that education should build character. Education should develop ethics, rationality, compassion and sensitivity in students as well as make them capable for employment. One of the objectives of the National Education Policy is to improve the curriculum and pedagogy of our institutions and also to create awareness among the students about their fundamental duties and constitutional values as well as their roles and responsibilities as citizens in the changing world.

The President noted that Maharana Pratap Education Council, established in 1932 with the goal of social upliftment through the spread of education, is running about 50 educational institutions in northern India, especially in eastern Uttar Pradesh. He was happy to note that in these institutions emphasis is being laid on the overall development of personality of the students apart from providing modern education.

The President said that the Gorakshpeeth has been playing major role in the socio-religious awakening of India for centuries. During India’s freedom movement, this Peeth had played an important role in the political awakening. Even at present, Shri Gorakshapeeth remains the center of public awareness, public service, education and medical service.