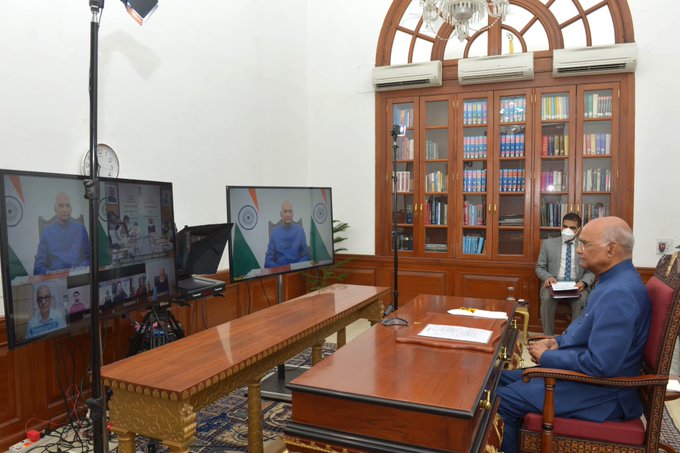 New Delhi: The National Education Policy aims to reorient the education system towards meeting the needs of the 21st century by achieving the twin objectives of inclusion and excellence. It sets the vision of developing an equitable and vibrant knowledge society by providing quality education to all, said the President of India, Shri Ram Nath Kovind in the inaugural address of Visitors’ Conference on ‘Implementation of National Education Policy 2020 in Higher Education’ today (September 19, 2020).

Appreciating the efforts of the Education Ministry and Dr. Kasturirangan and his team, who prepared the policy, the President mentioned that the Policy has been prepared after extensive consultation with 2.5 lakh gram panchayats, more than 12,500 local bodies and about 675 districts generating more than two lakh suggestions thereby reflecting a ground-level understanding.

Encouraging institutions of higher education, President Kovind observed that these institutes have greater responsibility of making India a global knowledge superpower. The quality standards set as benchmark by these institutions would be followed by other institutions. The President emphasized that fundamental principles of the Policy include creativity and critical thinking in order to encourage logical decision-making and innovation. He drew inspiration from Bhagvad Gita and the Krishna-Arjun dialogue while reiterating the concept of free communication and discussion between the teacher and the student. The NEP also seeks to encourage critical thinking and spirit of enquiry. He opined that effective implementation of the NEP 2020 is likely to restore India’s glory as a great centre of learning as during the times of Takshashila and Nalanda.

President Kovind, describing the novel features of NEP, said that it would also introduce the system of Academic Bank of Credits. It would digitally store the academic credits earned from various Higher Education Institutions so that degrees can be awarded, taking into account the credits earned by students. This would allow students the freedom to take courses as per their vocational, professional or intellectual requirements in addition to giving flexibility of suitable exit and re-entry points. The need for strict monitoring of B.Ed., vocational and distance-learning courses is also being taken care of in this policy, he added.

During the course of the address, the President also highlighted that the target of the NEP 2020 is to increase the Gross Enrolment Ratio or GER in higher education to 50 percent by 2035. He observed that the online system of education can also be utilized to reach this target especially in catering to the female students or those who do not have physical access to educational institutions as well as the international students. Citing statistics, he added that according to All India Survey of Higher Education for 2018-19, GER for females is slightly higher than that for males. However, the share of female students is extremely low in Institutions of National Importance and particularly low in technical education. Emphasizing that NEP has focus on equity and inclusion, he said that such gender disparity in higher education should be corrected. The President also observed that it would be the role of head of institutions that would have an impact on the teachers and students and hence the heads of organizations should take active interest in implementing the policy.

The Union Education Minister, Shri Ramesh Pokhriyal Nishank gave the opening remarks of the Conference. Welcoming the dignitaries attending the Conference, he said that education is the basis of progress for any society. It is not just constitutional but moral responsibility of the government to implement a robust education policy. Shri Pokhriyal expressed hope that the NEP 2020 would be able to decentralize and strengthen our education system.

Shri Pokhriyal recalled that on September 7, 2020, the Governors’ Conference was held under the guidance of the President on same subject. The aim to strategize the implementation of this policy was initiated by the Prime Minister, Shri Narendra Modi and the focus is to improve the quality of education standards in our country. This policy has given access to foreign universities to open campuses in India and vice-versa which will be instrumental in the process of making India a soft power, the Minister added.

Emphasizing on NEP, Union Education Minister observed that all hurdles in the process of implementation of NEP should be overcome and dialogue should be established with all stakeholders. He further requested the Vice Chancellors and Heads of Institutions to take the policy to maximum number of people. The support of all sections is imperative in brainstorming about the implementing process, he added. Shri Pokhriyal in his address said synergy from all institutions, academia and the students will be helpful for expeditious implementation of NEP 2020.

The Conference saw the participation of Vice Chancellors of all Central Universities and Directors of IITs, NITs, SPAs etc.

All nine UC undergraduate campuses rank among the nation’s top 40 public universities, top 100 of all schools