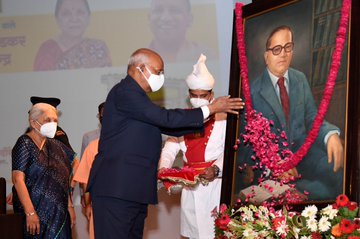 Lucknow: Our real success lies in building a society and the nation according to the values and ideals of Babasaheb, said the President of India, Shri Ram Nath Kovind. He said that we did make progress in this direction but still needed to cover much ground. He was speaking at the foundation stone laying ceremony of Dr Bhimrao Ambedkar Memorial and Cultural Centre in Lucknow today (June 29, 2021).

The President said that the multi-dimensional personality and invaluable contribution of Dr Bhimrao Ambedkar to the nation-building revealed his extraordinary capability and talent. He was not only an educationist, economist, jurist, politician, journalist, sociologist and social reformer, but also made invaluable contribution in the fields of culture, religion and spirituality.

The President said that Morality, Equality, Self-respect and Indianness are four most important ideals of Babasaheb’s vision. The glimpses of these four ideals are found in his thoughts and actions. His cultural thinking was basically laid on harmony. Dr Ambedkar spread the thoughts of Lord Buddha. Objective of his efforts was taking Indian values like compassion, fraternity, non-violence, equality and mutual respect to the masses and to realize the ideal of social justice. Lord Buddha’s message of compassion and harmony was the basis of his life and politics. Babasaheb stressed on the need of politics based on the cultural values of morality and harmony. He used to say that he is an Indian first, an Indian later and an Indian at the last.

The President said that Babasaheb always advocated for providing equal rights to women. Women have been given the same fundamental right to Equality as men in the Constitution drafted by him. Dr Ambedkar wanted that the fundamental right to Equality should be given a clear legal base through a separate bill on issues related to inheritance of property and marriage and other aspects of life. Today our legal system is progressing on the path suggested by him on many issues like property rights for women. This showed that Babasaheb’s visionary thinking was far ahead of his times, he said.

The President said that the initiative of the Uttar Pradesh government to build a cultural center in the form of a memorial to Babasaheb in Lucknow is commendable. He expressed confidence that on the completion of construction, this cultural centre would play an effective role in educating all the citizens, especially the younger generation, with the ideals and objectives of Dr Ambedkar.

Click here to see the President’s Message in Hindi