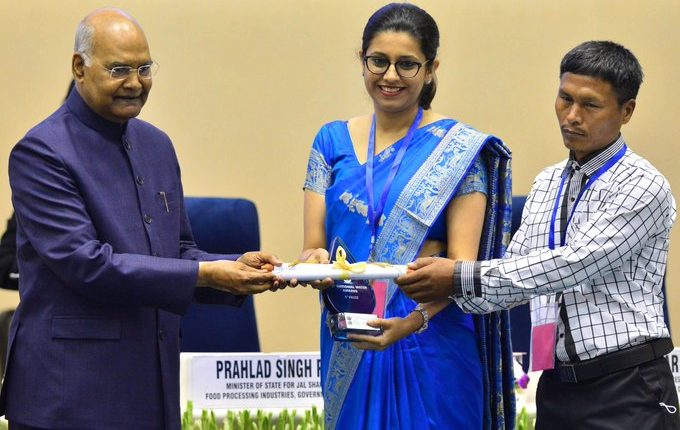 Speaking on the occasion, the President said that presentation of National Water Awards for exemplary work in the field of water management, and expansion of water campaign to underline the importance of water in our daily life and on the planet Earth, is commendable.

The President said that it gives him immense pleasure to launch ‘Jal Shakti Abhiyan: Catch the Rain 2022’. He urged everyone to work on the focused interventions of this edition of the campaign. He said that district magistrates and village sarpanchs would have to play a crucial role in motivating the local populace for active participation of each individual in water conservation work. He urged everyone to take a pledge that just as the largest vaccination drive in history is being carried out in India, in the same way we all would make this campaign the biggest water conservation campaign in the history.

The President said that it is quite appropriate to say that ‘water is life’. Nature has blessed humanity with water resources. It has provided us with vast rivers, on whose banks great civilizations flourished. Rivers have special significance in the Indian culture and are worshiped as Mother. We have dedicated places for worship of the rivers – for Ganga and Yamuna in Uttarakhand, for Narmada in Madhya Pradesh and for Ganga-Sagar in Bengal. Such religious practices kept us connected with nature. The construction of ponds and wells were considered a virtuous act. Unfortunately with the advent of modernity and industrial economy, we have lost that connect with nature. Population growth is also one of the factors. We find ourselves cut off from nature that has sustained us. We make the difficult journey to Yamunotri to express our gratitude and offer prayers to the Yamuna. But when we return to the capital Delhi, we find that the same river has become extremely polluted, and is no longer useful in our city life.

The President said that water sources like ponds and lakes, which provide water to cities throughout the year, have also disappeared under the pressure of urbanization. It has turned water management upside down. The quantity of ground water is decreasing and its level is also going down. On one hand, cities have to draw their water from faraway places and, on the other hand, streets are flooded in monsoons. He said that scientists and activists have also been expressing their concern about this paradox of water management during the last few decades. In India, this problem becomes more serious because our country has about 18 percent of the world’s population, while we have only 4 percent of the fresh water resources. The availability of water is uncertain and depends to a large extent on rainfall.

The President said that the issue of water is a part of an even larger crisis of climate change. As climate changes, flood and drought conditions are becoming more frequent and more severe. The Himalayan glaciers are melting, and the sea level is rising. The serious consequences of such changes are coming to the fore, which are having an even worse impact on the lives of farmers, women and the poor.

The President said that today the water crisis has became an international crisis and it can take dire forms. Some defense experts have even said that in future it can become a major cause of international conflict. We all have to be alert to save humanity from such situations. He expressed happiness that the Government of India is taking effective steps in this direction.

The President said that facing the impact of climate change and protecting our Earth is an epic challenge before all of us. To meet this challenge, Government of India has adopted a new approach and methodology. The Government of India gave an early indication of change in 2014 by renaming the Ministry of Environment and Forests and incorporating ‘Climate Change’ in it. Moving forward in this direction, in the year 2019, by merging two ministries, the Ministry of Jal Shakti was formed to work in an integrated and holistic manner on the issue of water and to give it the highest priority.

The President was happy to note that India has taken effective steps to reduce the effects of climate change and ensure water security through efficient use of water, conservation of water sources, minimizing pollution and ensuring sanitation. He said that in recent years, the policies of the Government have included rejuvenation of rivers, holistic management of river basins, expeditious completion of long pending irrigation projects to strengthen water security in a sustainable manner and rejuvenation of existing dams.

The President said that in order to make water everyone’s business and to make the Jal Andolan a Jan Andolan – a mass movement, the Government of India in 2019 launched the ‘Jal Shakti Abhiyan’. And in the same year ‘Jal Jeevan Mission’ was also launched. Last year on 22nd March, on ‘World Water Day’, the ‘Jal Shakti Abhiyan: Catch the Rain’ campaign was launched by the Prime Minister which was taken up in all districts in rural as well as urban areas of the country during the pre-monsoon and monsoon period. He appreciated state governments for their commendable contribution in the success of this campaign amidst the challenges of the corona pandemic.

Noting the exemplary work done by the National Water Award-winners for water management in their respective fields, the President said that on the basis of such examples, we could find hope for a water-secure future. He congratulated all of them and urged them to continue being exemplars and source of motivation for all of us. He expressed confidence that these Awards would usher in a water consciousness in the minds of people of India and would help in bringing about a behavioural change.