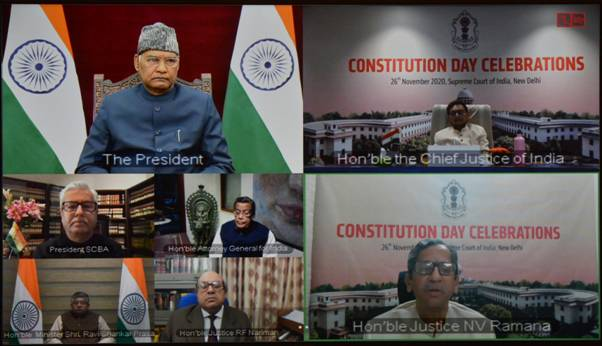 New Delhi: President of India, Shri Ram Nath Kovind, virtually inaugurated the Constitution Day Celebrations, organised by the Supreme Court of India, to mark the 71st anniversary of the adoption of the Constitution, today (November 26, 2020).

Speaking on the occasion, the President was happy to note that the Supreme Court has continued to function and dispense justice amid the pandemic, using technological solutions like video-conferencing and e-filing. He commended the Bar, the Bench and the officials for not letting the coronavirus come in the way of fulfilling the duty of securing justice for all. He said that the compulsion induced by Covid-19 can indeed help us further in finding more creative ways to fulfill that task and augment the access to justice.

IIM Tiruchirappalli has been entrusted with the…

The President said that the Supreme Court of India has earned a reputation for its superior standards and lofty ideals. He observed that landmark judgments passed by the Supreme Court have strengthened the legal and constitutional framework of our country and it’s Bench and the Bar are known for their intellectual depth and legal scholarship. He was confident that this Court would always remain the sentinel of justice.

Pointing to the fact that our Constitution is the lengthiest document of its kind, the President said that its bulk is not an issue if its provisions are well thought out. Appreciating the Constitution, he opined that the spirit of the epic of our times is elegantly captured in the Preamble. In mere 85 words, it spells out the core values that propelled the Freedom Struggle, the vision of our Founding Fathers, the dreams and aspirations of every Indian, he added. He said that the task before us, is to recognize these noble ideals as a way of life; that is, to translate these words into everyday acts. What it implies for the Judiciary, he asked. The Preamble speaks of the resolve to secure for all its citizens social, economic and political justice, he added. He reiterated that the notion of justice itself implies access to justice. In other words, justice can be secured only to the extent that it can be accessed.

Speaking about the conduct in public life, the President quoted Dr Rajendra Prasad’s remarks when his name was announced as the first President of India and said “I have always held that the time for congratulation is not when a man is appointed to an office, but when he retires, and I would like, to wait until the moment comes when I have to lay down the office which you have conferred on me to see whether I have deserved the confidence and the goodwill which have been showered on me from all sides and by all friends alike”. The President stated that this should be the aspiration of those holding high constitutional posts and should strive to set an example, always rising above partisanship and prejudices. These observations of Rajen Babu apply to all of us, said the President as he urged to introspect how we can better live up to the ideals of the Founding Fathers, as enshrined in the Constitution in general and the Preamble in particular.

#UORWAY: STAYING FIT WITH THE SPORTSPARK COUCH TO CHRISTMAS CHALLENGE