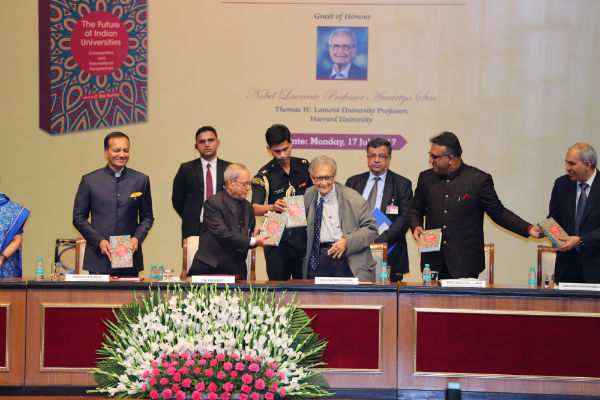 Speaking on the occasion, President Pranab Mukherjee said, “I congratulate Professor Raj Kumar and all contributors for their efforts in coming up with a book on the future of universities in India, which is a very pertinent topic. JGU is an example of how with determined efforts, focus on research, significant number of publications and international collaborations, a university can cover a long distance in a short span of just eight years.”

Talking about the contemporary issues plaguing higher education sector, President Mukherjee said, “Our needs today are much more complex, along with the post-independence emphasis on nation-building through institution-building, we are now increasingly being called upon to think about the role of Universities in the larger global context of an increasingly interconnected and interdependent world. The Universities of today are required to compete globally for research-ranking to help build World-Class Universities.”

“As our Universities of the Future gear up for global competition to find their place on the tables of institutional rankings, let us not forget the difference between ‘world-class’ and ‘world-minded,” he added.

Nobel Laureate Professor Amartya Sen, Thomas W. Lamont Professor & Professor of Economics and Philosophy, Harvard University delivered a special address on the occasion. Professor Sen said, “This book is important because of the collaborative efforts of remarkable scholars who have raised questions regarding the quality and excellence of higher education in India. “

He further emphasized on the need for freedom and autonomy of higher educational institutions in India and said “We need to think about why India does not rank among the top 200 universities in the world. The difference between Indian Universities and those in other countries is that they are autonomous and free from political policies and obstacles. The mindset in this country needs to change to bring excellence and freedom in the field of education,”

JGU Chancellor Naveen Jindal asserted JGU’s commitment to shaping India’s aspirations of building world class universities through comparative and international dimensions. He said, “The universities of the future must become central pillars of growth and development of a nation that churns out intelligent minds for the 21st century. It is time for India to join ranks with world class universities and improve the academic environment for our students.”

Professor (Dr) Raj Kumar, said, “It is President Mukherjee’s 6th association with our University. We at JGU feel extremely lucky to have hosted him on multiple occasions to discuss key national and global issues, particularly relating to higher education.”

Speaking about the book, Professor Kumar said, “At a time when the state of universities and their value to the larger society is being increasingly debated, universities are compelled to rethink their roles and the role of the higher education system. This book seeks to address contemporary issues that are central to the transformation and creation of the universities of the future, not only in India but in other parts of the world as well”.

(Dr) Virander S. Chauhan, Acting Chairman, University Grants Commission in his keynote address said, “The quality of higher education in India has to be viewed not just by students, but parents and teachers as well. Indian Universities have tremendous potential and need to accelerate their pace. This can only happen if we have good leadership. The public sector needs a huge transformation in the field of higher education, and private universities need to be a model for quality and excellence.”

The book comes at a time when social, political, and economic shifts across the world make it imperative for India to take stock of the state of its universities and redefine their roles in the fast changing global scenario. The book highlights critical issues in higher education in India and is a culmination of a range of ideas and perspectives that will shape India’s aspirations of building world-class universities through comparative and international dimensions.

The contributors in the book have argued for fundamental reforms to bring about a sense of purpose in the education system. The chapters are authored by leading scholars in the field of law, liberal arts, international relations, and science and technology studies.