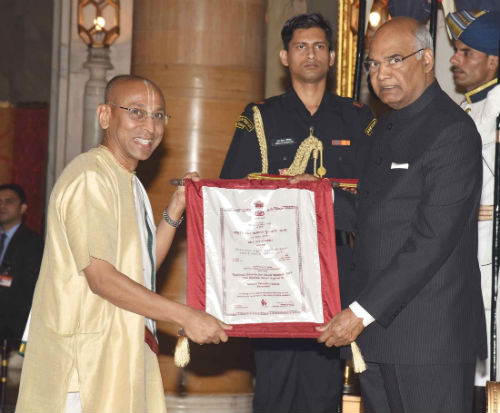 New Delhi: The President of India, Shri Ram Nath Kovind conferred The Akshaya Patra Foundation, with the National Child Award for Child Welfare 2017 recently at Rashtrapati Bhavan, New Delhi. The award was received by Shri Chanchalapathi Dasa, Vice-Chairman, The Akshaya Patra Foundation. The awards were given in the presence of Minister of State for Women & Child Development, Dr Virendra Kumar.

Ministry of Ayush announces flagship event in Gujarat, to be…

On receiving the award, Shri Chanchalapathi Dasa said, “It is a matter of honour for The Akshaya Patra Foundation to be bestowed upon the National Award for Child Welfare by the Hon’ble President of India, Shri Ram Nath Kovind. I sincerely thank everyone for the award and for recognising Akshaya Patra as an organisation that has undertaken initiatives to alleviate concerns of hunger among school children while responding effectively to their social needs for a better future.”

The National Child Awards for Child Welfare 2017 are given to celebrate the exceptional achievements of children; as well as to individuals and institutions who work for child welfare and for their outstanding contribution in the field of child development and welfare. The awards were instituted with a view to recognize such voluntary action. The award carries a cash prize of INR Three Lakh and a citation for each institution