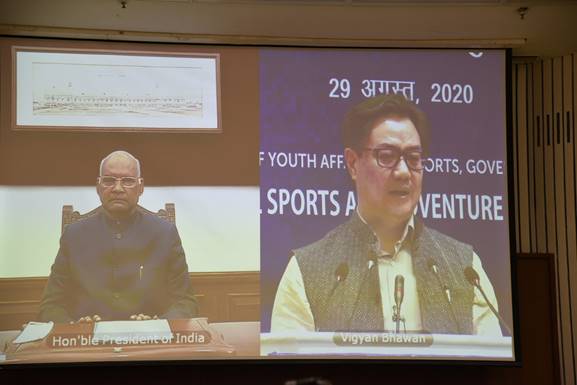 Speaking on the occasion the President of India Shri Ram Nath Kovind said that COVID-19 has adversely affected the sports world too. Olympic Games have been postponed. Sports activities in our country have also been affected. Players and coaches might be feeling less motivated due to lack of practice and competitions which poses a huge challenge for their mental and physical preparation. He was happy to note that players and coaches have been connected through online coaching and webinars to overcome this challenge. He said that today’s event was an attempt to continue sports related activities despite the global pandemic.

The President was happy to note the increased diversity of sports in our country. He said that today’s award winners represent more than 20 sports. The growing popularity of our traditional games like Kabaddi, Kho-Kho and Mallakhamb will help in connecting the common people with sports. Today, apart from Cricket and Football, league tournaments of sports like Volleyball and Kabaddi are gaining popularity which is a pleasant change.

Union Minister of Youth Affairs and Sports Shri Kiren Rijiju said that I would like to thank the President of India for honouring the award winners in this very special function, which is taking place virtually because of the coronavirus pandemic. The Minister explained that this is the first ever virtual awards presentation function where the awards have been conferred by the Hon’ble President of India. The presence of the President will only encourage our young sportspersons to better their performances going forward, he added. I would like to congratulate all our award winners, who are present with us here in Delhi and who are connected through from various centers through NIC.

Shri Rijiju added that under the leadership of Prime Minister Shri Narendra Modi, the Ministry is running many schemes for the field of sports and adventure. Khelo India and Fit India are excellent examples of this. He added that we have prepared a long term plan and our aim is that India will figure in the first ten countries of winners at the Olympics of 2028.

Shri Rijiju said that he wanted to use this occasion to appeal to the citizens of the country to support sports and sportspersons. The Sports Minister also said that the achievements of the award winners will inspire an entire generation to take up sports.
The Rajiv Gandhi Khel Ratna Award, the highest sporting honour of the country is given for spectacular and outstanding performance in the field of sports by a sportsperson over a period of four years. There were five winners of the award this year, cricketer Rohit Sharma, wrestler Vinesh Phogat, table tennis player Manika Batra, hockey player Rani Rampal and Para-athlete Mariyappan Thangavelu. The Arjuna Award is given for consistent performances over a period of four years, amongst the winners this year were shooters Saurabh Chaudhary and Manu Bhaker, wrestler Divya Kakran, boxer Lovlina Borgohain and badminton stars Chirag Shetty and Satwiksairaj Rankireddy. This year athletes in KhoKho, Kabaddi, Equestrian and winter sports were also awarded with the Arjuna Award. The Dronacharya award is given to the coaches who have been instrumental in producing medal winners at prestigious international sports events. The Dhyan Chand Award is for lifetime contribution to sports development and Rashtriya Khel Protsahan Puraskar is given to the corporate entities (private and public sector) and individuals who have played a visible role in the area of sports promotion and development. Overall top performing university in inter-university tournaments is given Maulana Abul Kalam Azad (MAKA Trophy). In addition to these sports awards, the spirit of adventure among the people of the country is recognised by bestowing the Tenzing Norgay National Adventure Award.