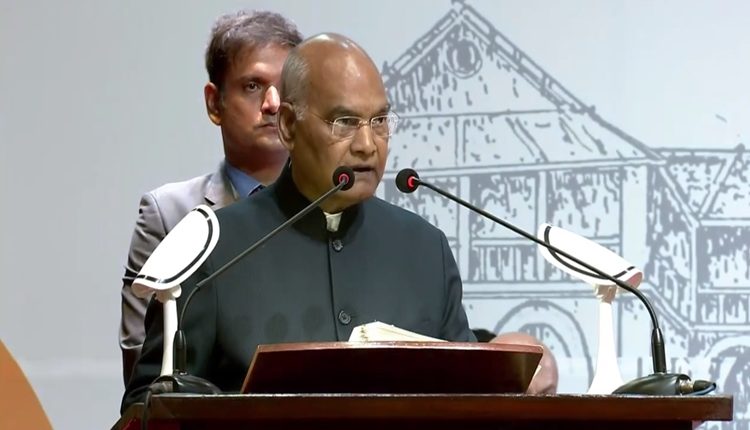 New Delhi: President Ramnath Kovind has said that as the Supreme Commander, he was happy to see the rising number of women in the armed forces, including in combat roles. Inaugurating the Platinum Jubilee celebration of Rashtriya Military school that was set up in 1946 in Bengaluru, he expressed confidence that the girl cadets, joining this prestigious school, would contribute in defending the nation and play their role in nation-building.

The President was happy to note that from this academic year onwards, girl cadets are going to get admission into Rashtriya Military Schools across the country. He said that our daughters are breaking many glass ceilings and setting new records in various fields, making the country proud.

Speaking on the occasion, the President congratulated all cadets, teachers, alumni and staff members on the platinum jubilee of Rashtriya Military School, Bengaluru. He said that since its establishment, the school has come a long way and is acknowledged as one of the finest boarding schools in the country. He noted that at present, cadets from 23 states are receiving education in this school.

He said that from Jammu & Kashmir to Kerala, the cadets in this school represent our “Unity in Diversity”. He expressed confidence that this inter-mingling has helped the cadets to learn and appreciate the culture, language and traditions of their fellow cadets. He recalled the contribution of Field Marshal K M Cariappa and General Thimayya who hail from Karnataka. The President mentioned the distinguished alumni of the school.

Capt Gurbachan Singh Salaria, an alumnus was posthumously presented Param Vir Chakra for his supreme sacrifice during a UN operation in Congo. He recognised the presence of Vice Chief of Naval Staff S N Ghormade and Lt.General CP Cariappa in the gathering. During the inaugural the Governor of Karnataka Thaawarchand Gehlot, Chief Minister Basavaraj Bommai and others were present.

Loughborough University: Startups invited to apply for one of 20 places on Loughborough-based business accelerator

HCL Technologies conducts a walk-in drive in Odisha for Class 12th students; Looking to hire 1000 freshers from the state