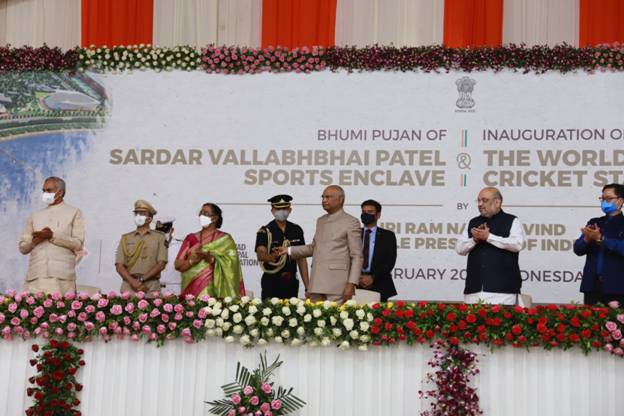 Expressing heartfelt gratitude to the President for the inauguration of the stadium and the Bhoomi Poojan of the sports enclave, the Union Home Minister Shri Amit Shah said that today is a golden day in India’s sports history. Today, the ground-breaking ceremony of a big sports enclave named after the Iron Man of India, Bharat Ratna Sardar Patel has been performed by the President. Shri Amit Shah said that the world’s largest cricket stadium with state-of-the-art facilities will be named ‘Narendra Modi Stadium’. 1.32 lakh spectators will be able to witness matches at this stadium. The stadium has 11 pitches, unrivalled by any stadium in the world. There are four dressing rooms, besides, a match can resume within half-an-hour without disturbance even after heavy rainfall. LED lights are installed, which will not cast a player’s shadow on the pitch and will also save 40 to 50 percent electricity. Shri Shah said that a hi-tech media room has also been constructed which will telecast sports competitions held here across the globe.

Shri Amit Shah said that this is a historic stadium and many records have been made here. He said that for the first time, today’s match will be played with a pink ball. Shri Shah said that Kapil Dev broke Richard Headley’s record of 431 test wickets at this ground. Sunil Gavaskar scored 10,000 runs on this ground and Sachin Tendulkar completed 18,000 runs in One Day Internationals and twenty years of his cricket career at this stadium.

The Union Home Minister said that the Sardar Vallabhbhai Sports Enclave to be built here is an ambitious project. He said that it will be the largest sports enclave in the country to be built on 233 acres of land. This enclave will have world class sports facilities. It also includes a new 18-acre sports complex in Narayanpura. Shri Shah said that together with the sports complex built at the Sardar Patel Sports Complex, Narendra Modi Stadium and the Sports Complex being built at Narayanpura, all the three taken together will create all sports infrastructure at one place in any one city for conducting all sporting events of any international sports, and this is a matter of pride for Ahmedabad. There will be accommodation for 250 coaches and 3,000 children will be able to train together. Shri Shah said that the infrastructure created is such that Ahmedabad will be ready in six months to host the Commonwealth Games or the Olympics. Shri Amit Shah also said that the dream project of Prime Minister Shri Narendra Modi when he was the Chief Minister of Gujarat, has been fulfilled today and Ahmedabad will be known as the Sports City of India.

Shri Shah said that the BRTS and Metro are also going to reach the area and when the riverfront extension is finished, the water of the Narmada and Sabarmati rivers will always provide an atmosphere of peace and coolness here. Shri Amit Shah said that more than 600 schools of Gandhinagar and Ahmedabad rural district will be connected with it and children of those schools that do not have their own playgrounds will be able to avail sports facilities. Once a week, a child will come here to play the whole day, have food and reach home safely in the evening. He said that a total of 20 stadiums will be built in the Sardar Sports Enclave and these stadiums will be named after players who have brought recognition to the country at the international level, which will also inspire sports lovers. There will be around 3,000 apartments in which 12,500 children will be able to reside.

Shri Amit Shah said that by creating the Sardar Vallabhbhai Patel Sports Enclave, Shri Modi has paid special respect to Sardar Patel. Sardar Patel’s contribution was in uniting the country after Independence, had it not been for Sardar, we would have been divided, but history has done injustice to him. Shri Narendra Modi has made sure that no matter how many years anybody rules, the name of Sardar will remain immortal for ages. The Prime Minister made the tallest statue in the memory of Sardar Patel, the son of Gujarat and the Iron Man of the country. Today, more people come to see the statue of Sardar Patel than the Taj Mahal. The Sardar Patel Sports Enclave has been built with the inspiration of Shri Narendra Modi, and will serve to give children across the country a very good platform to come forward at international sporting events. There will not be a sport which is not available here. The package is designed according to all international standards and highest sporting principles and no single city of India has these type of facilities. Shri Shah said that the total cost of the project is Rs. 4,600 crore with a government investment of Rs 3,200 crore and public partnership of Rs 1,400 crore.

Shri Amit Shah said that it would not be incomplete without a mention of Prime Minister Narendra Modi’s vision for sports. When Shri Modi was the Chief Minister of Gujarat, he took many important initiatives to promote sports in the state. When Shri Modi became the President of the Gujarat Cricket Association, he gave a vision to promote all sports along with cricket. He took this further after becoming the Prime Minister. Shri Shah said that the Prime Minister believes that the youth cannot achieve things until they progress in sports, that is why the Prime Minister started Khelo India. The Union Home Minister said that his parliamentary constituency has been given a huge gift by the Prime Minister in the form of the Sardar Vallabhbhai Patel Sports Enclave. Shri Shah said that the day is not far off when Indian players will feature in the gold and silver medals tally at the Asian and Olympic Games. Appealing to the youth, he said that under the slogan of Atmanribhar given by the Prime Minister, it is necessary to be self-reliant in every field, and the youth of the country should strive to be self-reliant in sports too. Shri Shah said that the youth should come forward in sports and make it a career and the government will give them all possible help. Shri Shah also said that success in sports will increase India’s global fame. He appealed to parents to pledge to send their children to the complex to promote their interest in sports. Shri Amit Shah also encouraged parents to let their children play in the open fields, leave them to toil, only then they will get used to losing and that will instill the confidence to win.