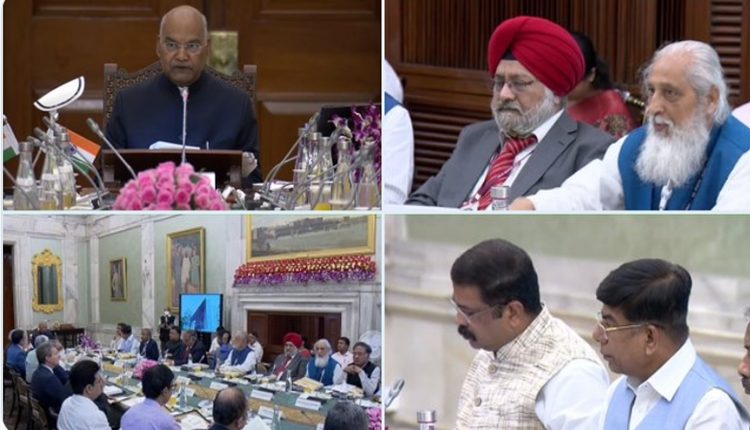 New Delhi: President Ram Nath Kovind has said that in order to achieve the larger goals, improving the quality of institutions of higher learning is of vital importance. Inaugurating the two-day Conference of Vice-Chancellors of Central Universities and Directors of Institutions of National Importance at Rashtrapati Bhavan this evening, Mr Kovind said, we should be setting benchmarks for the best in the world.

He expressed happiness that, this year 35 Indian institutions have been ranked in the QS ranking as against 29 last year. In the top 300, there are six institutions this year as against four last year. Mr Kovind also noted that the Indian Institute of Science has got a full score of 100 on the research parameter and shares this distinction with eight highly reputed institutions of the world, including Princeton, Harvard, MIT and Caltech. He congratulated IISc director and his team for this achievement.

The President said, Azadi ka Amrit Mahotsav commemorating the glorious history of India’s freedom movement finds a place in the opening session. He said that the institutions of higher learning are central to this, as the young citizens are not only the inheritors of the past, but also the ones who will be leading India into its next golden age. Mr Kovind said, institutions of higher education have a major responsibility of transforming the impressionable youth and for this, we need to address their aspirations, as they are future leaders in various spheres of life.

Speaking about the quality of education, the President said that to improve it, we should also consider sophisticated and innovative learning approaches. He said, the key to achieving excellence is to harness the transformational benefits of digital technologies for enriching the teaching and learning experience. Mr Kovind said, digital technologies are expanding the boundaries of education. He said, when the pandemic threatened to derail teaching and learning, technology ensured continuity. The President said, there were difficulties, but it is good to see that educational institutions imparted teaching and conducted assessments, evaluations and research uninterrupted. He said, we can build on that experience now and make classroom sessions more interactive, giving students a thorough understanding of the subject. Mr Kovind said, educators and academic experts should consider this when they prepare the curriculum and other policy initiatives.

The President noted that in order to encourage an ecosystem of start-ups and innovation, nearly 2,775 institutional innovation councils have been set up in Higher Education Institutions in 28 States and six Union Territories. He expressed confidence that this would go a long way in promoting the aims of a socially relevant partnership between the institutions of higher education and the industry. He also noted that India’s ranking in Global Innovation Index has significantly improved from 76 in 2014 to 46 in 2021. He said, however, in order to improve the culture of innovation and entrepreneurship in India, we need to encourage the filing for patents and streamline the process for it.

The President is the Visitor of 161 Central Institutes of Higher Education. Out of 161 institutes, 53 are attending the Conference physically while others are connected virtually.

In different sessions, the Conference will deliberate on various topics such as – Role and responsibilities of Higher Education Institutions in Azadi ka Amrit Mahotsav, international rankings of Higher Education Institutions, the collaboration between Academia-Industry and policy-makers, integrating school, higher and vocational education, education and research in emerging and disruptive technologies.

During the inaugural session of the Conference, the President also presented the Visitor’s Award 2020 for Research (Biological Sciences) to Prof Mohammad Zahid Ashraf, Department of Biotechnology, Jamia Millia Islamia for his research on hypoxia-induced thrombosis.

Visitor’s Award 2020 for Technology Development was given to Prof Pritam Deb, Department of Physics, Tezpur University for his work on development of biodegradable polymer film reinforced with two-dimensional hetero-structure for food packaging. The third Visitor’s Award 2020 for Research (Physical Sciences) will be conferred on Prof Anunay Samanta, School of Chemistry, University of Hyderabad later on for his contribution to the spectroscopy and dynamics of short-lived chemical species formed on photo-excitation of molecular systems and materials.