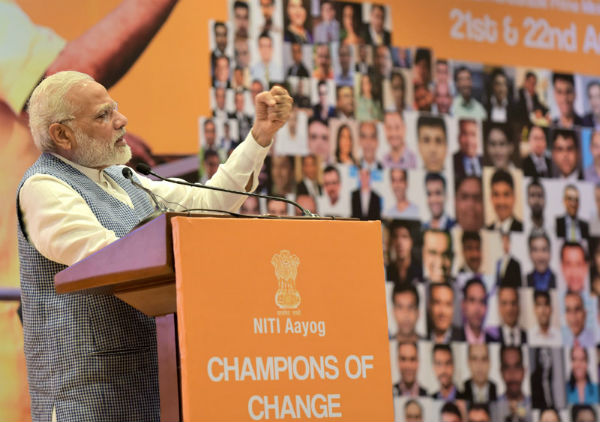 Six groups of young CEOs made presentations before the PM on themes such as Make in India; Doubling Farmers’ Income; World Class Infrastructure; Cities of Tomorrow; Reforming the Financial Sector; and New India by 2022.

Appreciating the new ideas and innovations envisaged in the presentations made by the CEOs, the Prime Minister thanked them for the valuable inputs and time devoted to ideation for the benefit of the country.

He said the key decision making team of the Government has listened carefully to the presentations, and will surely benefit in their policy-making, from the 360 degree view of issues that have been presented.

The Prime Minister said people’s participation is an important element of governance. Similarly, he said, this attempt at CEOs partnership with Government is aimed at enhancing their participation towards welfare of the people, and the nation.

Recalling India’s freedom struggle, he said Mahatma Gandhi made all Indians, soldiers for freedom, even as they continued to do their own work. Hence, he helped the freedom struggle become a mass movement.

The Prime Minister said that today, development too, must become a mass movement. He said that a spirit should be created, whereby we all set targets for our contribution to India, by 2022. You are my team, and we need to work together to take India forward, the Prime Minister told the CEOs.

The Prime Minister said the Union Government has taken a number of decisions that have brought about fundamental transformation. He gave the illustration of decisions taken for urea availability and production – such as gas price pooling; remuneration for excess production etc. This led to additional production of 20 lakh tonnes of urea. He said Neem-coating of urea ended its large scale diversion.

He said that the Government wants to move towards making India a less-cash society. He asked CEOs to partner with Government to build momentum in this regard.

Similarly, he said that on occasions such as festivals, Khadi could be promoted through gifting etc – and this would greatly help the poor. He said an atmosphere must be created to take the poor along in every sphere of life.

The Prime Minister gave the example of Government e-Marketplace (GeM) to show how small traders are competing successfully in provision of supplies to the Government. He said 1000 crore rupees have been transacted through GeM so far and 28,000 suppliers have contributed to this platform.

The Prime Minister said Indians must take pride in their own country. He said each one should develop a temperament to promote tourist destinations within India, spontaneously among their contacts.

Giving the example of “waste to wealth” entrepreneurs, the Prime Minister said that this can help achieve the objectives of Swachh Bharat and clean environment. He said the aim of entrepreneurs and business should be to provide products which solve simple problems faced by people in the country.

Several Union Ministers and senior Government officials were present on the occasion.