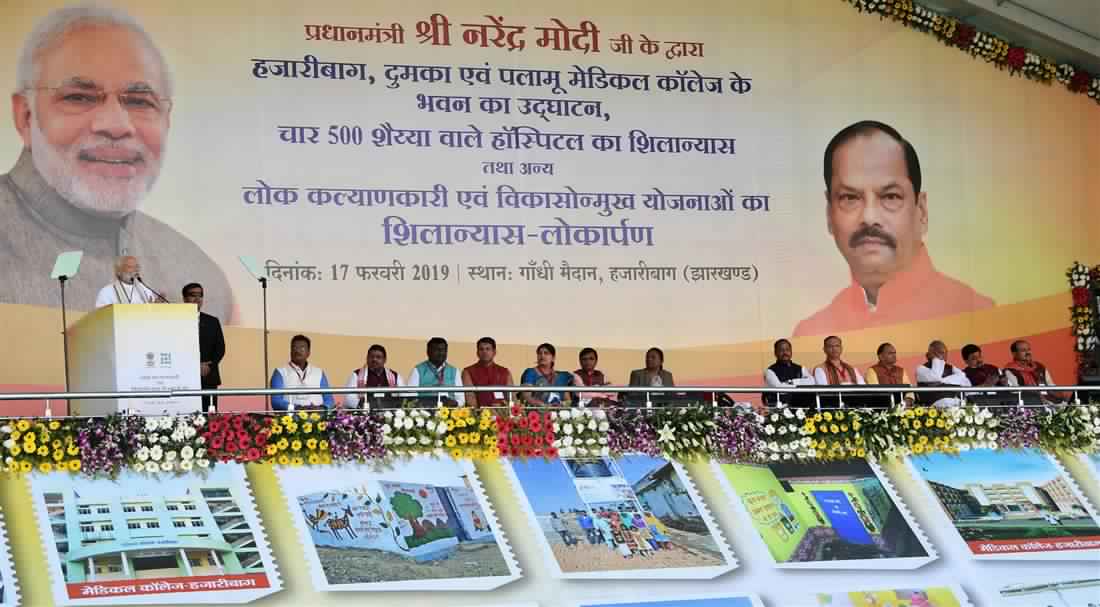 Prime Minister dedicates to nation the Medical Colleges at Hazaribagh, Dumka and Palamu

Inaugurates the first Only Women Engineering College in Eastern India at Ramgarh.

Addressing the gathering the PM said “I pay homage to Shri Vijay Soreng, the braveson of Jharkhand who laid his life for the nation. At every step we will have to take care of the families of martyrs”.

PM inaugurated the Medical Colleges at Hazaribagh, Dumka and Palamu. The foundation stone of these colleges were laid by PM in 2017. The new Medical colleges are built at a cost of Rs 885 crores. Each college campus is made disabled friendly. The modern medical facilities will benefit 1.5 crores people of 11 districts of Jharkhand. The PM said “it is this land of Jharkhand that witnessed the launch of Ayushman Bharat Yojana that has benefitted lakhs of people across India including thousands from Jharkhand. And constant efforts are being made to improve the health infrastructure of the state”. He laid the Foundation Stone for four 500-bedded hospitals at Hazaribagh, Dumka, Palamu and Jamshedpur.

The Prime Minister also inaugurated the Sahibganj Sewerage Treatment Plant, and the Madhusudan Ghat, under the NamamiGange initiative.

PM distributed cheques to select beneficiaries to mark the launch of DBT scheme for farmers to purchase mobile phones under e-NAM. The PM said “the scheme will benefit 27 lakh farmers. With the help of a smartphone they would not only get weather information but information of crop prices, government schemes and new methods of farming also”.

PM e-inaugurated the Only Women Engineering College at Ramgarh. PM said that it is first such college in Eastern India and only third in entire India where only women will study engineering. Foundation Stone for the Centre for Tribal Studies, Acharya VinobaBhave University, Hazaribagh was also laid by PM. He said that the institute will help in garnering and spreading the knowledge on tribal ways and culture. The PM said that sabkasaathsabkavikas entails empowerment of all sections of the society including poor, women, youth and tribals. And the college for women and tribals are efforts in this direction.

The Prime Minister distributed packed milk to select school-children to mark the launch of Kanha Milk Scheme for students in government schools. The students will get 200 ml of milk everyday which will help in fighting malnourishment. PM said “I hope each child will realise her full potential and make the nation proud”.

PM reiterated that his government is making efforts to preserve and promote the memories of tribal heroes of our freedom struggle in museums and memorials. The Birsamunda Museum of Jharkhand is one such example.