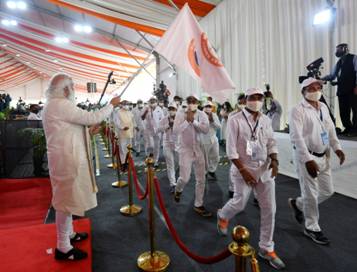 Addressing the gathering at Sabarmati Ashram, the Prime Minister stated that the launch of the ‘Azadi ka Amrit Mahotsav’ 75 weeks before 15 August 2022 will continue till 15 August, 2023. He paid homage to Mahatma Gandhi and great personalities who laid down their lives in the freedom struggle.

The Prime Minister reiterated five pillars i.e. Freedom Struggle, Ideas at 75, Achievements at 75, Actions at 75 and Resolves at 75 as guiding force for moving forward keeping dreams and duties as inspiration.

The Prime Minister asserted that Azadi Amrit Mahotsav means elixir of energy of independence. It means elixir of inspirations of the warriors of freedom struggle; elixir of new ideas and pledges and nectar of Aatmnirbharta.

Speaking on this occasion, the Union Minister of State (Independent Charge) for Culture Shri Prahlad Singh Patel said that after 91 years, we are all now on the same soil from where Gandhiji started the Dandi March. But it is a completely transformed India now. Recalling the words of the Prime Minister, the Union Culture Minister said that the journey of India will now be defined by self-reliance and self-respect. Our image on the world canvas will be that of a contributor. The new and self-reliant India has delivered medicines and vaccines to the world. We want to focus on labor and toil so that our future generations are carved out in strength. The Prime Minister envisions that when the country celebrates the centenary (100th year) of Independence, then our achievements and cultural glory should be an outshining example before the world. Shri Prahlad Singh also stated that Azadi ka Amrit Mahotsav shall be a Jan Mahotsav and the programs will be organized as per the interest of the general public. In fact, these programs will be organized by the citizen themselves.

Addressing the audience, the Chief Minister of Gujarat Shri Vijay Rupani thanked the Prime Minister for initiating the Amrit Mahotsav celebrations of our independence from the soil of Gujarat. The Dandi March is an important milestone of our freedom struggle. For a promising future it is necessary to understand our past, he said.

The Chief Minister further added that today the attention of the whole country is focused on Gujarat. He said that two sons of Gujarat i.e Gandhiji and Sardar Patel played a pivotal role in our struggle for freedom. And now, under the able leadership of Prime Minister Shri Narendra Modi, our nation is moving in the direction of transforming the country into a Vishwa Guru.

The Prime Minister launched the website of India@75 on the occasion. He also launched the ‘Atmanirbhar Incubator’ programme of Ministry of Culture in partnership with Sabarmati Ashram Preservation and Memorial Trust to preserve the skills and arts of artisans/crafts persons on the verge of extinction.

A unique Charkha Campaign was also started by the Prime Minister to promote ‘Vocal for Local’.(Give tweet of PM or Minister on Charkha)

A short film on ‘Azadi ka Amrit Mahotsav’ was screened on the occasion and Dandi Yatra Geet was also performed. The occasion was marked by colourful and inspiring cultural performances in the spirit of Ek Bharat Shreshtha Bharat representing cultural variety and diversity from across the country. The performances ranged from those based on patriotic song penned by famous Tamil poet Subramania Bharti to Vande Mataram by Bankim Chandra Chatterjee to beautiful cultural item from Kashmir among others.

Azadi Ka Amrut Mahotsav is a series of events to be organised by the Government of India to commemorate the 75th Anniversary of India’s Independence. The Mahotsav will be celebrated as a Jan-Utsav in the spirit of Jan-Bhagidari throughout the length and breadth of the country.

Flame of freedom was kept burning brightly by our saints, mahants and acharyas in every part of the country: PM Modi