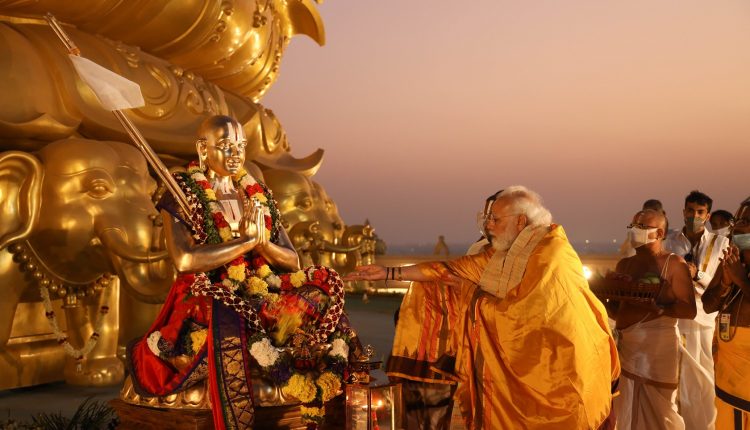 Lauds the historic initiative of creating a spiritual zone on a global scale to inspire the whole world with the eternal teachings of Sri Ramanuja, the 11th century Bhakti saint and social reformer The unveiling of the Statue is a part of the 12-day Sri Ramanuja Sahasrabdi ‘Samaroham’, the 1000th birth anniversary celebrations of Sri Ramanjua, which commenced on February 2, 2022, with the world’s biggest Sri Lakshmi Narayana Maha Yajna

Hyderabad :  Prime Minister, Sri Narendra Modi Ji has dedicated to the world today the 216-feet tall Statue of Equality which commemorates Sri Ramanujacharya’s teachings promoting equality in its truest sense among people of all faith, caste, and creed. He visited the 45-acre temple complex housing the statue and the identical recreations of 108 Divya Desams, centered in Shamshabad, Hyderabad.

The unveiling of the Statue of Equality is a part of the ongoing 12-day Sri Ramanuja Sahasrabdi ‘Samaroham’, the 1000th birth anniversary celebrations of Sri Ramanjua, commenced on February 2, 2022. His Holiness Chinna Jeeyar Swami presided over the event that attracted the participation of politicians, celebrities, and thousands of devotees from all over the world.

The Statue of Equality is made of ‘panchaloha’, a combination of five metals: gold, silver, copper, brass, and zync. The 54-ft high base building, named ‘Bhadra Vedi’, has dedicated floors for a Vedic digital library and research centre, ancient Indian texts, a theatre, an educational gallery detailing many works of Sri Ramanujacharya.

In his speech, Sri Modi Ji, said, “I am so proud to witness the moment of the inauguration of the Statue of Equality. It is indeed a very proud moment for every Indian. India holds many great minds, and one of them was Sri Ramanujacharya, who taught us the lesson of equality between all cast, creed, and gender. Statue of Equality puts our nation at the forefront as a firm believer in equality, having one of the most diverse population globally. I would also take this opportunity to thank HH Tridandi Chinna Jeeyar Swamiji, who took the initiative to give our nation a symbol of equality and unity, which is the very essence of Bharat.”

Welcoming everyone at the grand opening of the Statue of Equality, HH Chinna Jeeyar Swamiji, said, “Bhagavad Ramanujacharya remained a true icon of equality for 1000 years and this project would ensure that his teachings are practiced for at least another 1000 years. Our mission is to make the Statue of Equality a culturally paramount destination for people across the globe and inspire everyone to make the world a more equal place to live,” he said.

Sri Lakshmi Narayana Maha Yajna, a Vedic rite of offering oblations to the sacred fires, marked the commencement of the ‘Samaroham’. Featuring the participation of 5000 Vedic Scholars the Maha Yajna was conducted on February 2, 2022, with 1035 ‘yaaga kundas’ (the ritual pits) located at 144 ‘homashalas’, making it the world’s largest yajna of its kind in modern history. His Excellency, President Sri Ramnath Kovind Ji will unveil the inner chamber Ramanuja on February 13, 2022.

Sri Ramanuja Sahasrabdi ‘Samaroham’ includes many spiritual activities such as chanting of nine branches of the four Vedas, japa of Ashtakshari Maha Mantra, also known as Mantra rajam (king of all mantras), the recitation of Itihasas, puranas and agamas. The ongoing chanting of Ashtakshari Maha Mantra is expected to reach the counting of one crore by the end of the Samaroham. The foundation stone for the project was laid in 2014.

IIT Bhubaneswar successfully organized a one day webinar on the topic “How to Start an Enterprise” on February 5th, 2022