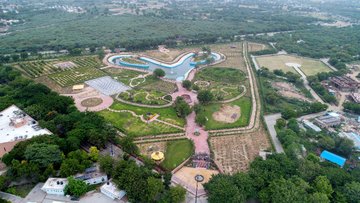 New Delhi: Prime Minister, Shri Narendra Modi, today inaugurated several development projects in Gujarat through the virtual medium. These projects include the newly redeveloped Gandhinagar Capital Railway Station and the Aquatic Gallery, Robotic Gallery and Nature Park at Science City Ahmedabad. Union Home Minister Shri Amit Shah also attended the program through video conferencing. On this occasion, Shri Shah said today is a very joyous day for the whole of Gujarat and especially for all citizens of Gandhinagar Lok Sabha constituency. After 35 years, complete rejuvenation of Gandhinagar Railway Station is going to take place at the hands of the Prime Minister. When the idea of ​​this railway station was conceived and the original plan was created and later when construction began, many people thought it was a courage of engineering. However, today this courage has been successful and it is being inaugurated by the Prime Minister Shri Narendra Modi.

The Union Home Minister said when Shri Narendra Modi was the Chief Minister of Gujarat, his insistence and goal was to make all development works in Gujarat of world class and planning was done accordingly. As a result of this, many development-oriented world-class projects have been made in Gujarat today, which are exemplary in the whole world and today this scheme has also been added to it. Shri Amit Shah said the redevelopment project of Gandhinagar Capital Railway Station has cost about Rs. 800 crore and the Five star hotel built with it, will boost infrastructure and tourism in Gandhinagar. The Railways have completed many projects in Gujarat after Shri Narendra Modi became the Prime Minister. Recently, after the world’s tallest statue of Sardar Vallabhbhai Patel came on the global stage, the Railways have also done the work of connecting eight important places of the country and today the work of connecting Gandhinagar with the city of Baba Vishwanath, Varanasi is also completed. Along with this, a Mainline Electric Multiple Unit (MEMU) service train will also be started between Gandhinagar and Veretha, which will prove to be very useful for the people. Gauge conversion and electrification of the Mehsana-Veretha railway section and electrification of the Surendranagar-Pipavav section are also being inaugurated today, this will further the goals of railway gauge conversion and electrification.

Signing of Memorandum of Understanding (MoU) between the…

Cashfree Payments joins hands with Furlenco to delight its…

Shri Amit Shah said the Aquatic Gallery and Robotic Gallery at the Science City will prove to be very important for students interested in Science. An effort has been made to present the robotics industry and its dimensions in a very beautiful and elegant way before small children in an area of ​​about 11 thousand square meters in the Robotics Gallery. It shows many uses of robots from the human-robot dialogue to agriculture, space, defence and other fields. In the Aquatic Gallery, an important task of satisfying children’s curiosity about the marine world, from whales in about 40 lakh liters of water, is going to be completed in Science City today. Along with this, the Nature Park is also going to be inaugurated at the hands of the Prime Minister today at an expenditure of Rs. 13 crore in an area of about 8 hectares. There are plans to convert it into a biological park as well.

It is a matter of great fortune for the Union Home Minister that world class development projects are being started in his constituency of Gandhinagar. Shri Amit Shah said that for this he expresses his heartfelt gratitude to the Prime Minister on behalf of the people of Gujarat and Gandhinagar Lok Sabha constituency. This this gift you are giving to the people will prove to be very useful for all voters of Gandhinagar constituency. And a new dimension will be created in the development of Gujarat. Shri Shah also expressed his gratitude to the Government of Gujarat.