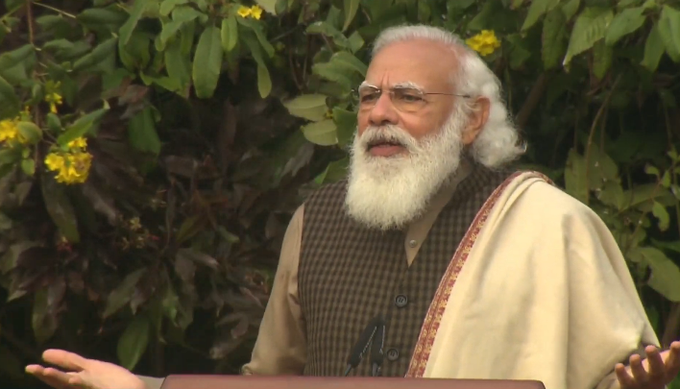 Speaking on the occasion, the Prime Minister said that the participation of the tribal guests, the artists, NSS and NCC cadets in the Republic Day Parade fills every citizen with energy. Their display of the country’s rich diversity fills everyone with pride. The Prime Minister said that Republic Day Parade is a tribute to India’s great socio-cultural heritage and to the Constitution that gives life to the world’s biggest democracy.

The Prime Minister pointed out that this year, India is entering 75th years of independence and this year we celebrate 400th Prakash Purab of Guru Teg Bahadur ji. Also, this year marks the 125th birth anniversary of Netaji Subhas Chandra Bose which has been declared as Parakram Diwas. These events inspire us to rededicate ourselves to the cause of our country, said the Prime Minister

Prime Minister told his young guests that India is an embodiment of collective strength of aspiration of its countrymen. He said India means – many states-one nation, many communities -one emotion, many paths-one goal, many customs-one value, many languages-one expression and many colours-one tri colour. And this common destination is ‘Ek Bharat-Shreshth Bharat’. He appealed to the young guests from all parts of the country to work for raising awareness of each other’s customs, cuisine, languages and art. The Prime Minister said that ‘Ek Bharat-Shreshth Bharat’ will give strength to ‘local for vocal’ movement. When one region will feel pride for the product of the other region and will promote that, only then the local product will have national and global reach. Success of ‘vocal for local’ and Aatamnirbhar Abhiyan is dependent on our youth, said the Prime Minister.

The Prime Minister stressed the need for right skill set in the youth of the country. To underline this importance of skill, he informed, Skill Ministry came into being in 2014 and 5.5 crore young people have been imparted different skills and helped with self-employment and employment .

This skill focus is evident in the new National Education Policy where application of knowledge is stressed upon. Flexibility in choosing subject of one’s choice is a key aspect of the policy. The policy marks the first serious effort to bring vocation education into the mainstream of education. From class 6 onwards, student will have the option of selecting a course in line with their interests and local needs and business. Later also, at middle level, integration of academic and vocational subjects is proposed.

The Prime Minister commended NCC and NSS for their contribution to the country in the hour of need, especially during Corona time. He asked them to take it forward in the next phase of the fight against the pandemic. He asked them to come forward to help in the vaccination drive and use their reach in all the corners of the country and every part of the society to spread awareness about the vaccine. “By making the vaccine, our scientists have fulfilled their duty, now it is our turn. We have to defeat every attempt to spread falsehood and rumour”, said the Prime Minister.