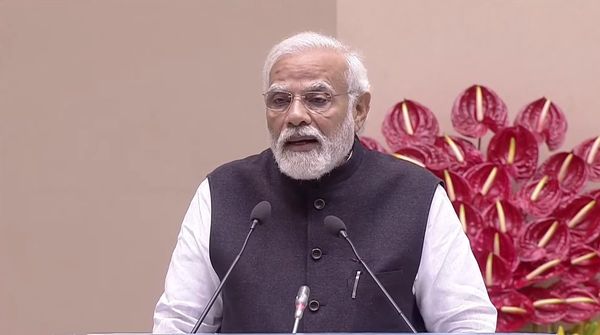 New Delhi: Prime Minister Narendra Modi said that real growth is not possible without inclusion. He said, the Government has taken several steps in the last eight years to ensure inclusive growth by providing better health care facilities and basic amenities to the poor people.
Prime Minister Narendra Modi today attended the first Arun Jaitley Memorial Lecture in New Delhi. While addressing the gathering, Mr. Modi said, the theme of this lecture ‘Growth through Inclusivity, Inclusivity through Growth’ is very appropriate as inclusive development is necessary for real growth.
He said, India has made tremendous efforts for inclusive growth which is unparallel in the world. He said, nine crore women got free gas connection and 10 crore toilets have been built for the poor. He said, 45 crore Jan Dhan accounts have been opened and three crore pucca houses have been built for the poor people.
The Prime Minister said 3.5 crore poor people got free treatment under the Ayushman Bharat Scheme. He said, these efforts brought the excluded class into the mainstream and ensured growth.
At the start of his speech, Prime Minister Narendra Modi remembered former Prime Minister of Japan Shinzo Abe and expressed grief over the demise of his friend.
He said, India-Japan scaled a new height during the period of Prime Minister Shinzo Abe. He said, Shinzo Abe will remain in the minds of the Indian public for many years. Remembering Arun Jaitley, Mr. Modi said, his personality was full of diversity and his nature was very friendly.
Delivering the lecture, Tharman Shanmugaratnam said Arun Jaitley was an unusual combination of humility and generosity. He said, Mr. Jaitley marshalled the complex reform like GST. He said, India is looking to build a New India in the next 25 years.
He said, India has greater opportunity in the next 25 years, however, it needs higher ambition of growth, social inclusivity, sustainable society and economy to realise the targets. He also lauded the various reforms and schemes initiated by the Government of India for the welfare of the people.
Remembering the contributions of Arun Jaitley, Nirmala Sitharaman said, he was behind the major economic reforms including Goods and Service Taxes and Insolvency and Bankruptcy Code.
The Department of Economic Affairs has organised the first Arun Jaitley Memorial Lecture in recognition of former Finance Minister Arun Jaitley’s invaluable contribution to the nation.
Senior Minister in the Government of Singapore Tharman Shanmugaratnam, Finance Minister Nirmala Sitharaman and other dignitaries participated in the event.