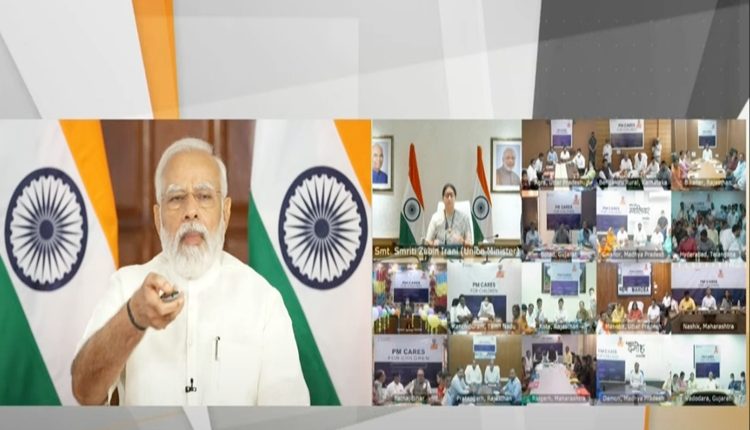 New Delhi: Prime Minister Narendra Modi has said that the children who have lost their parents due to COVID19, will get full support for their schooling and higher education. Releasing the benefits under the PM CARES for Children Scheme through video conferencing, Mr Modi said, PM-CARES for children is an initiative to relieve some of the burden children face after losing their parents. He said, the children between 18 to 23 years will get a fixed stipend and on attaining the age of 23, they will get ten lakh rupees. Mr Modi said, PM-CARES will help those who need education loan for professional courses and for higher education.

The Prime Minister said, through PM CARES, government is supporting children by providing four thousand rupees per month for daily needs. He said, through the scheme children is being provided a Ayushman Health Card that will cover health expenses upto five lakh rupees.

My Tirth India, a new hope for spiritual Tourism in India,…

The Prime Minister said, PM-CARES initiative has been made possible through the contributions of citizens across the country. He said, through these contributions, government has been able to ramp-up healthcare infrastructure. Mr Modi said, this fund has also helped a lot in preparing hospitals, buying ventilators, setting up oxygen plants during the Corona period. He said, through this fund government is also helping children who have lost their parents. He urged all children to take part in Fit India and Khelo India initiatives. The Prime Minister encouraged all children to make Yoga and fitness part of their daily routine.

The Prime Minister said, government has completed eight years today and the country is moving forward with the spirit of Aatmanirbharta. He said, through Sabka Saath, Sabka Vikas, Sabka Vishwaas, Sabka Prayaas, nation is moving forward with unprecedented speed to achieve growth and development in the country. Mr Modi added that the last eight years have been dedicated towards serving the poor with initiatives like Swachh Bharat mission, Jan Dhan and Ujjwala Yojana.

Mr Modi said, by increasing the use of technology, the government has ensured the rights of the poor. He said, now the poorest of the poor are confident that they will get the benefit of the government’s schemes. The Prime Minister said, to increase this trust, the government is now running a campaign of 100 per cent empowerment

My Tirth India, a new hope for spiritual Tourism in India, partnered with over 800…

Limitless career opportunities for CAs; Technology to be well integrated with CA…

iednewsdesk May 30, 2022
Berberine, a natural compound found in plants such as barberry and goldenseal, supresses the proliferation of…

Aalto University: The participatory budgeting project culminated in a…

IIM Kozhikode Launches the 9th Batch of the Senior Management…