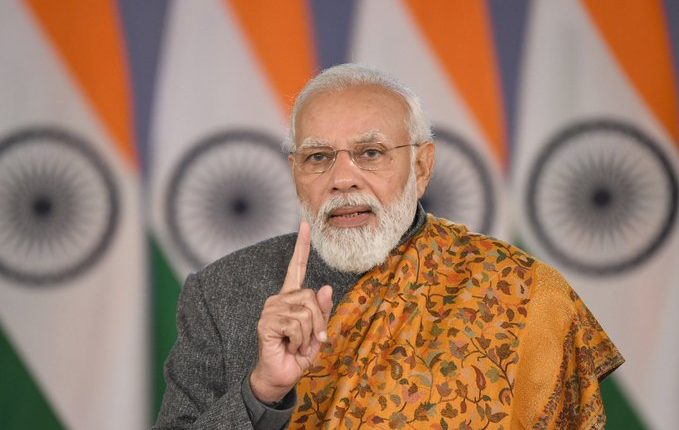 Soon after arriving here from New Delhi this morning, Dr Jitendra Singh held a thorough review of more than a dozen stalls being put up by the Union Ministry of Science & Technology for Exhibition during the Prime Minister’s visit to Jammu to grace the nationwide “Panchayati Raj Diwas” celebrations on this Sunday.

Dr Jitendra Singh said that the Stalls put up by various departments and wings of the Union Ministry of Science & Technology will display latest technologies and innovations beneficial for rural areas and farming. The Minister had already inspected the 500 KV Solar Plant and other Exhibition themes on Tuesday at the Palli Panchayat of Samba District, which was completed in record time.

Dr Jitendra Singh said that the carbon-free solar plant has been installed on a total area of 6,408 square metres and was completed in a record time of 18 days and will provide clean electricity and light to 340 houses in the Panchayat. It was built by Central Electronics Limited, PSE under Department of Scientific and Industrial Research, Union Ministry of Science and Technology, the Minister added.

Dr Jitendra Singh informed that some of the themes identified for the Exhibition are: poverty and enhanced village livelihood, Healthy village, Child-friendly village, Water sufficient village, Clean and green village, Self-sufficient infrastructure in village, Engendered development in village to be implemented by different departments of Science Ministries will bring about revolutionary transformation in augmenting the household income of the rural populace.

Similarly, the Minister said, Stalls showcasing integration of Science & Technology with the themes of Rural Development and Panchayati Raj will be put up for the benefit of common man. He added that instead of having conventional stalls at the event, efforts are being made to showcase latest technology which can add value to farmers’ income and science-based demonstration with Panchayati Raj features.

Dr Jitendra Singh also reviewed with senior scientists of CSIR the Aroma Mission and the overall impact of Purple Revolution in augmenting income resources of common man. He said, “Purple Revolution” is Jammu & Kashmir’s contribution to “Start-ups India”. The Minister informed that the CSIR had, to begin with introduced high-value essential oil bearing lavender crop through its Jammu based laboratory, Indian Institute of Integrative Medicines (IIIM) for cultivation in districts Doda, Kishtwar, Rajouri and later also in the other districts including Ramban, Pulwama, etc. In a brief span of time, aroma/lavender cultivation has become a popular option in farming for agricultural Start-up, he said.

Dr Jitendra Singh said, there is a need for widespread publicity that IIIM Jammu was helping the Start-ups in aroma and lavender farming to sell their produce. Prominent companies like Mumbai based Ajmal Biotech Private Limited, Aditi International and NavnaitriGamika, etc., are the primary buyers, he added.

Pertinent to mention that Aroma Mission is attracting Start-ups and agriculturists from across the country, and during Phase-I CSIR helped cultivation on 6000 hectares of land and covered 46 Aspirational districts across the country. More than 44,000 persons have been trained and several crores of farmers’ revenue generated. In the second Phase of Aroma Mission, it is proposed to engage over 45,000 skilled human resources with the aim of benefitting more than 75,000 farming families across the country.

Dr Jitendra Singh also expressed satisfaction that more and more technocrats are leaving lucrative jobs in corporate sector and taking up DBT promoted Dairy Start-ups. He said, over 10 thousand dairy units were set up in the last two years in Jammu and Kashmir. Recently, the Minister met Dinkar Kaushal, a B.Tech, who quit his job in Bengaluru and launched a start-up with Sahiwal cattle dairy under Department of Biotechnology and making handsome earnings. The Minister said, such initiatives must be replicated across the UT for giving decent earning opportunities for the youth.

He said, there is huge scope in Dairy Start-up to promote the setting up of modern dairy farms for the production of clean milk, encourage heifer calf rearing, and generate self-employment.