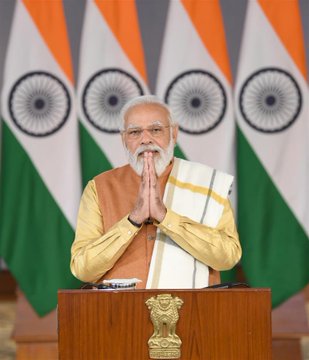 Notes the coincidence of 75 years of India’s Independence, Cannes Film Festival and of diplomatic relations between India and France “India has a lot of stories to be told and the country truly possesses immense potential to become the content hub of the world” “Government remains steadfast in its commitment to enhance ease of doing business in film sector” Expresses happiness about screening of a restored Satyajit Ray film in the Cannes Classic Section “India pavilion will display facets of Indian cinema and promote international partnerships and learnings”

By India Education Diary Bureau Admin On May 17, 2022
Share

New Delhi: Prime Minister Shri Narendra Modi has expressed happiness on India’s participation as ‘Country of Honour’ at the Cannes Film festival this year. In a message the Prime Minister noted that India’s participation comes at the momentous meeting of celebration of 75 years of India’s independence, 75th anniversary of Cannes Film Festival and 75 years of diplomatic relations between India and France.

Reiterating India’s commitment to improve ease of doing business in the film sector, Shri Narendra Modi has said that from facilitating international film- coproduction to ensuring single window clearance mechanism for permissions for filming across the country, India offers seamless possibilities to filmmakers of the world.

The Prime Minister expressed happiness that a Satyajit Ray film has been restored for screening in the Cannes Classic Section as India celebrates the birth centenary of the maestro.

One of the many firsts, startups from India will showcase their strengths to the cine-world. The Prime Minister expressed confidence that India pavilion will display facets of Indian cinema and promote international partnerships and learnings.