Diversity in many biological communities is a sign of an ecosystem in balance. When one species dominates, the entire system can go haywire.

For example, the uncontrolled overgrowth of certain oceanic algae species causes toxic red tides that kill fish and other sea life, and sicken humans. On a more individual level, the human gut hosts a large community of different bacteria that is crucial for proper digestion and absorption of nutrients. Disruption of or imbalances in this bacterial community can cause a bloom in the growth of a toxic species, causing nausea, diarrhea and other illnesses. There’s an urgent need to understand how microbial community diversity is developed and maintained, especially as human activities change our external and internal environments.

Princeton researchers Amir Erez, Jaime Lopez, Ned Wingreen and colleagues model how species diversity in a bacterial community is affected when the nutrients the microbes depend upon are only seasonally available. Here, bacterial and mouse gut cells are labeled with fluorescent markers.

Like all life, microbes require certain nutrients, such as sunlight, sugars or nitrogen sources, to survive and reproduce. Many microbe species’ nutrient requirements overlap, putting them in competition with each other. Much effort has been devoted to understanding how this competition influences microbial diversity when nutrients are steadily supplied. However, in nature, it’s quite common for the resources to be available only seasonally so that their supply is severely limited at least some of the time. For example, bacteria in the gut that live on sugars might find these abundant right after the human’s had a meal, and scarcer the rest of the time. Because each bacterial species is genetically unique, it will have its own particular strategy for using a given nutrient. Species with the most efficient strategies for using the available nutrients experience the best growth.

“A long-standing question about microbes concerns how so many different microbial species manage to coexist when competing for limited resources,” said Ned Wingreen, the Howard A. Prior Professor in the Life Sciences, a professor of molecular biology and the Lewis-Sigler Institute for Integrative Genomics, and the senior author on a paper in the Sept. 11 issue of the journal eLife.

Researchers can recreate seasonal nutrient supply in a laboratory by placing bacteria in a container with nutrients, letting them grow, then taking a small sample and moving it to a new container of nutrients — a process called “serial dilution.” Over time, the relative abundance of different species in the culture will change according to the nutrients available and the species’ nutrient use strategies. By performing repeated rounds of serial dilution, scientists can observe the effects of seasonally supplied nutrients on community diversity. 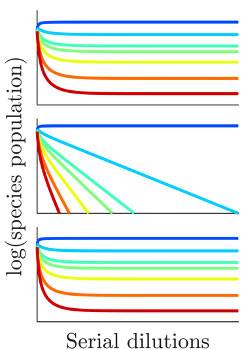 Different colors represent the relative abundance of different species when nutrients are only seasonally available. Community diversity is high when the bolus of nutrients supplies is either very low (top graph) or very high (bottom graph), but one species dominates at the expense of others (dark blue line, middle graph) at intermediate levels of nutrient supply.

It would be impractical to examine all possible combinations of bacteria, nutrients and nutrient utilization strategies using this method. Instead, the research team, — including associate research scholar Amir Erez and graduate student Jaime Lopez, co-authors on the paper and members of Wingreen’s lab — investigated this question by mathematically modeling serial dilution.

“In our paper, we develop a general theory of microbial resource competition in a seasonal ecosystem by modeling recurrent nutrient addition and depletion,” Wingreen said.

When nutrients are only seasonally available, the modeling uncovered a surprising relationship between species diversity and the amount of nutrients supplied. First, species diversity is high when all nutrients are supplied in very high amounts because growth of all species is equally unlimited at high nutrient levels. Diversity is also high at very low nutrient amounts because growth of all species is restricted under such conditions and no species can gain an advantage.

“Nutrient-consumption trade-offs in seasonal ecosystems can lead to stable ecosystems that support diversity beyond what is predicted by simpler mathematical models,” Wingreen said.

At intermediate nutrient levels, however, species diversity nose-dives because there will always be one species whose ability to use the most abundant nutrient present outstrips that of others. This species, which the authors call the “early bird,” gains an early growth advantage the others can never make up for.

The early bird effect crops up even in more elaborate versions of the model that allow species to feed off others’ metabolic byproducts, or for members of a dwindling species to be replenished by in-migration of new individuals. But the identity of the early bird, or whether there will even be one, shifts according to the inputs of the model: what nutrients are present and in what amounts; how often nutrients are supplied; and which species are present and what their strategies are. Whenever it appears, the early bird influences how the ecosystem responds to nutrient changes.

“This is an important paper,” said Alvaro Sanchez, a professor in ecology and evolutionary biology at Yale University and an editor at eLife. “It provides an elegant modeling framework to understand how nutrient supply and competition can structure coexistence and diversity in microbial communities, and it will motivate new experiments.”

New CRISPR-based map ties every human gene to its function

New CRISPR-based map ties every human gene to its function