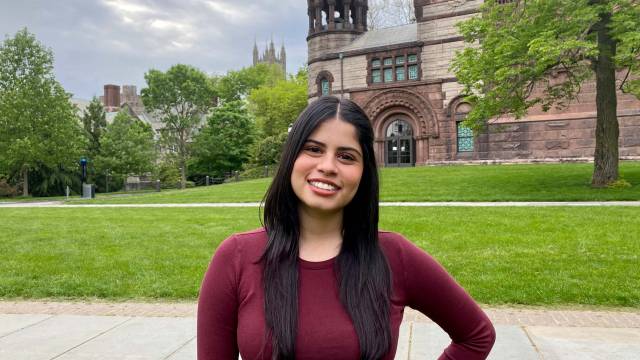 Princeton University senior Karina Aguilar Guerrero has received two of the University’s highest student honors for service to campus and the community. She won this year’s Allen Macy Dulles ’51 Award and Priscilla Glickman ’92 Memorial Prize in recognition of her work to enhance access, mentor underserved students and build community.

The University will host a virtual Commencement ceremony for the Class of 2020 at 1 p.m. EDT Sunday, May 31. A special in-person ceremony to honor the class is planned for May 2021.

The Dulles Prize is presented annually by the Office of the Dean of Undergraduate Students to the senior whose activities best exemplify the University’s informal motto of “In the nation’s service and the service of humanity.” The Glickman Memorial Prize is given annually by the John H. Pace, Jr. ’39 Center for Civic Engagement to a senior “who has demonstrated independence and imagination in the area of community service, seeks knowledge and purposeful adventure in unfamiliar cultures, and maintains strong academic work.”

Guerrero, of Pomona, California, is a Spanish and Portuguese concentrator earning a certificate in Latin American studies. She is a member of Butler College. Both on campus and off, Guerrero has worked to support first-generation and lower-income students and advocate for the Latinx community.

She has held leadership positions with the Scholars Institute Fellows Program (SIFP), which supports first-generation, lower-income students at Princeton, and served as co-director of Princeton Students for Immigrant Empowerment, a student organization with the Pace Center.

Guerrero led planning and execution for the IvyG conference for first-generation and lower-income college students across the country. The annual conference was held at Princeton in 2019.

Off campus, she worked in Trenton to create opportunities for underserved minorities and girls in the community. She served as head of programming for HomeWorks Trenton, a nonprofit that provides after-school boarding and enrichment programs for girls and young women. She has devoted countless hours to promote female empowerment and help girls achieve their full potential, developing academic curriculum and co-curricular programs for HomeWorks.

Guerrero also served as director of the Princeton Students for Immigrant Empowerment, a student organization whose mission is to advocate for the needs of undocumented students on campus and in the local community. As a Dream Team member, she also tutored Latinx high school students and facilitated SAT prep courses for the group.

As a member of Princeton Latinos y Amigos, Guerrero played a key role in planning the student organization’s annual conference, bringing local Latinx high school students and their parents to campus to help them learn more about the college application process.

She also served as an advising fellow for the nonprofit organization, Matriculate, mentoring four high school students around the country through their junior and senior year and encouraging them to apply to college.

Awards for seniors in the Class of 2020 will be announced throughout this week.

Applicants from China began online preparation for admission to TSU

iednewsdesk Jan 22, 2022
Dr. Erin Saupe was today recognised as a Finalist in the life sciences category of the 2022 Blavatnik Awards for…