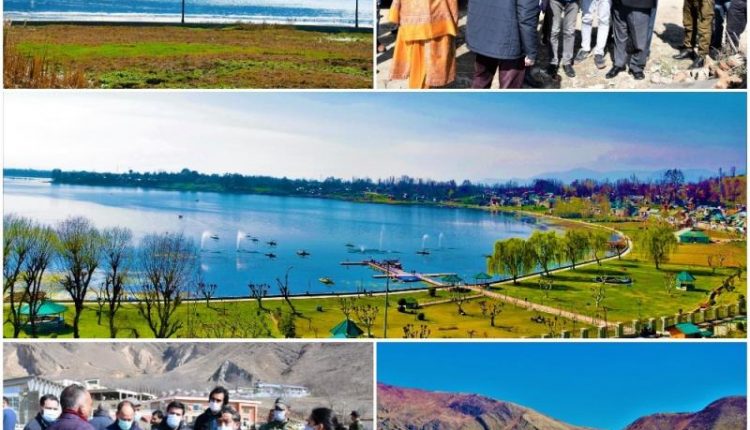 ADC, who is holding charge of Chief Executive Officer Manasbal Development Authority, briefed the Principal Secretary regarding the works undertaken for beautification of Manasbal Lake and its adjoining areas. He said that efforts are underway to develop Manasbal park into a beautiful recreation area which will add to its tourist influx.

Both Principal Secretary and Divisional Commissioner inspected the progress on development works being executed in Manasbal Lake like pathway construction, construction of septic tanks and waste management pits, deweeding, desilting, installation of boundary walls, removal of encroachments and other related works.

While reviewing progress on beautification works, Principal Secretary asked the CEO to install aerators along the periphery of Manasbal Lake for its beautification besides completing de-weeding and dredging works on war footing.

While appreciating the aesthetics of the lake and its adjoining areas, Principal Secretary said that Manasbal Lake being one of the major tourist attractions of the district requires protection. He directed for expediting beautification works on the lake and called for massive awareness generation on the importance of its preservation.

Principal Secretary exhorted upon the concerned to work in tandem and redouble their efforts so that the environment of the lake is preserved and its pristine glory is restored. He also stressed for generating mass awareness among the people especially living along the periphery of the lake regarding intrinsic natural value of water bodies.