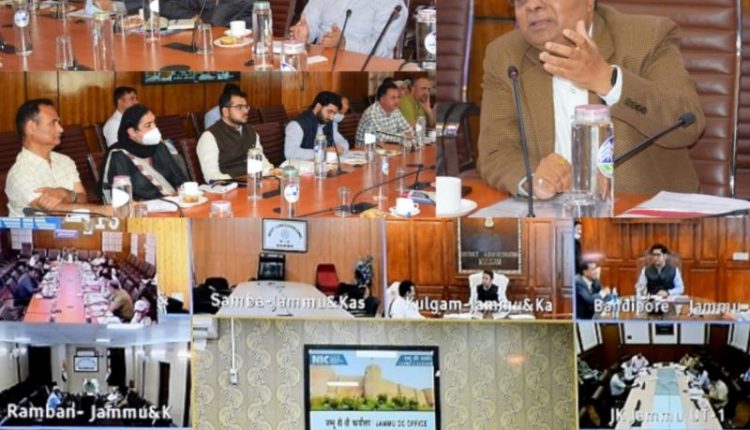 While reviewing the health care arrangements, Principal Secretary directed the officers that it is one of the top priority of the government to provide quality healthcare to the pilgrims coming for the Amarnath Yatra 2022. He emphasised upon the concerned officers to ensure coordinated heath care is made available to the yatris by Sri Amarnath Shrine Board (SASB), Health Department, Security forces and various NGOs.

He directed the officers to put in place all the arrangements before the commencement of Yatra including the issue of manpower, logistics and other high tech equipment in place. He directed the concerned to ensure availability of oxygen both portable and non portable at all the Health centres which are established along the route. He also directed the Nodal Officer for the Yatra to immediately follow up the issue of establishing a 100 bedded hospital by the DRDO so that same can be made operational. The Human Resource for the hospitals needs to be also be arranged well within the needed time frame. The issue of availability of medicines and equipment was discussed and strict directions were issued that all the medicines should be made available to the pilgrims. Meanwhile directions were also issued to streamline the registration of the Yatris by the District Administration.

It was reiterated that the pilgrims should be facilitated at all levels for a seamless and hassle free Yatra. The Food Safety Department was asked to ensure quality food is provided to the Yatris at the langars and food points enroute the yatra. Directions were issued that staff shall be available in all the healthcare institutions especially on the highways and critical points of the Yatra. While reviewing the medical contingency plan, Principal Secretary directed that emergency response system has to be quick and fool proof at all levels and necessary measures should be put in place in this regard. The deployment of Ambulances along the Yatra route was discussed threadbare and directions were issued for keeping the 102 and 108 Ambulance system in a phase of alertness during Yatra.

He took brief from Deputy Commissioner’s about the arrangements that have been put in place for the yatris and directed for augmentation of resources wherever required. He also said that Information Education and Communication programmes have to be organised and signages and boards should be established along the national highway and other important locations. He directed the concerned CMOs to be continuously remain informed and coordinated with the District and Divisional Administration.

Principal Secretary further asked the officers to examine the data from the previous years and ascertain the cause of deaths of pilgrims and put in a robust mechanism to lower the fatalities.

Deputy Commissioners briefed the Principal Secretary about the arrangements regarding halting centres and the augmentation of health care services that will be put in place. The DCs assured that all the arrangements shall be put in place and staff has been dedicated to ensure smooth conduct of the entire yatra. They informed that halting centres have been identified and health care workers and other facilities have been kept for medical centres.

Director Health Services Kashmir gave a brief presentation about the health care arrangements for the ensuing yatra. He informed that 70 medical centres will be set up which includes 6 base hospitals, 11 medical aid centres, 12 emergency aid centres besides 26 oxygen booths and 15 onroute facilities will be established for the yatra. He further informed that 17 onroute facilities will be kept on alert to meet any exigency. The training and deployment of medical staff has been worked out as per the current requirements.

Giving a break up of staff for the yatra he said that they have kept a staff of 739 from the UT, MoH&FW will be providing 155 while as 437 staff members will be made available from other states. The services of a total of around 1500 healthcare workers from J&K and other states shall be utilised to make the Yatra a success.