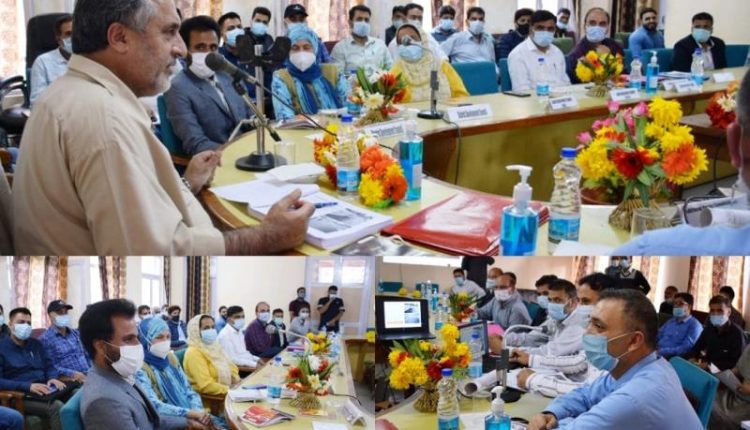 BANDIPORA : Principal Secretary, Skill Development Department (SDD) Dr. Asgar Hassan Samoon on Saturday visited Gurez sub-division of Bandipora district to review and get the first-hand account of the developmental activities of the area.

Dr. Samoon who is also the in-charge Secretary for Monitoring of Developmental Works of Bandipora district held a detailed meeting with the senior officers to assess the progress on different sectors.

Speaking on the occasion Dr Samoon urged the officers to work in mission mode to ensure the completion of all ongoing works without any further delay.

He asked the officers to ensure the important works are completed in Gurez valley before the onset of winter.

While remarking that Gurez valley has a limited working season, Dr. Samoon stressed upon the officers to expedite the pace of all ongoing works for their timely completion before the onset of winters.

At the outset, ADC and JDP gave a detailed Power Point Presentation about achievements of District during 2020-21 and 2021-22. They informed the meeting about the major developmental activities completed till date.

It was also given out in the meeting that Wullar Dredging Project is being completed at the cost of Rs 200.00 Crores and the work is in progress in full pace and 60 lakh cubic metres have been dredged so far.

ADC Bandipora informed the Principal Secretary that among new initiatives, Burnai-Tulail has been provided with a Mobile Network for the First time.

He also informed the meeting that 900 solar street lights have been installed in 123 Villages including Gurez and 03 towns of Bandipore while 1175 Works with 06 school buildings, 06 Roads, 03 Irrigation Schemes etc have been completed during last financial year.

It was given out that last year a record macdamization of 115 Kms was completed while this year the administration has set a target to macadamize 173 Kms out of which 77 kms have been macadamized so far.

Dr Samoon was informed that 10 MVA Receiving Station at Nasoo Bandipora was recently inaugurated that which augmented the power infrastructure in the district. It was given out that a modern ISM Health and Wellness centre with all modern facilities was also established in Aragam.

The meeting was further informed that nine projects including 7 bridges and two roads have been taken up for execution in Gurez valley while bridges at Dawar, Achoora Byepass, Satni Nallah and Gujran Tulail have been completed.

The meeting was also informed that under BADP sector, out of 47 On-going Projects costing Rs 19.08 Cr, 17 projects are targeted for completion this year including Road From Kashpat to Kilshay Phase-II , Food Godown at Wazirthal, Electrification of Blow-neil, Sekinder and Safadaab Villages for which an amount of Rs 1.39 Cr have been earmarked for the current Financial Year.

It was aslo given out in the meeting that the power position in Bandipora has considerably improved immediately after commissioning of 50MVA, 132/33 KV Grid Station Putshyi. The officers informed the Principal Secretary that presently an average of 22 hours power supply is provided to metered areas and 18 hours to non-metered areas with no other system constraints. They said 7 hour power supply is being provided to Gurez and Tulail areas through 22 DG sets where grid connectivity is not available.

ADC apprised the Principal Secretary that Grid connectivity to Gurez/Tulail areas work (under CSS DDUGJY) is under process for 33KV Bandipora-Gurez line while part of 11KV trunk lines from Khandyal to Chorwan and Barnai to Kashpot at Gurez/Tulail has been completed besides construction of 29 substations has also been completed.

Chess, Carrom tournament for u/17 boys & girls held at Nagseni