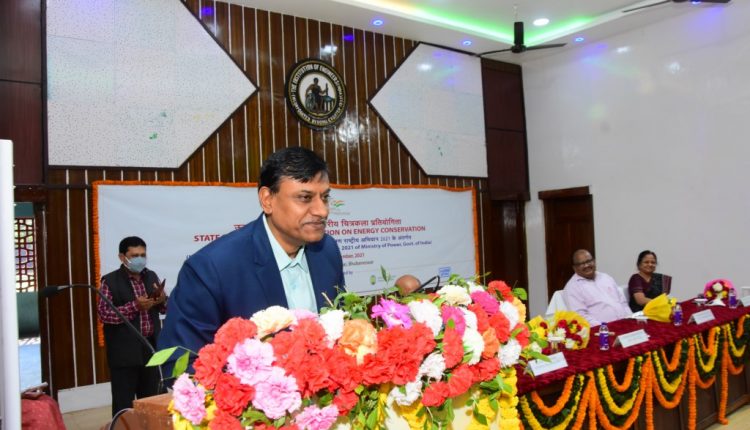 Bhubaneswar: The prize distribution ceremony for the State Level National Painting Competition on Energy Conservation-2021 was held at the Institution of Engineers Auditorium, Bhubaneswar on 10th December 2021.
Shri A.K. Goswami, Regional Executive Director, NTPC Eastern Region-II Headquarters was the Chief Guest of the Ceremony. Shri Pradeep Kumar Nayak, Additional Director, Odisha School Education Programme Authority, and Smt Soudamini Dash, Deputy Director, Odisha School Education Programme Authority were the guests of honour.
Addressing the gathering, Shri AK Goswami, Regional Executive Director stated that, it was the privilege of NTPC Eastern Region-II headquarters to coordinate the event for the state of Odisha. The participation has been enthusiastic from the students as well as the encouragement of the teachers. There was a huge participation from schools from all over Odisha for this competition. The Director of Odisha State Education Programme Authority and its team had contributed a lot to make the event a grand success. The District Education Officers of Odisha need special applause for their dedicated efforts. The heads of schools and teachers also have played an important role. Organizing a competition like this will certainly go a long way in promoting the concept of Energy Conservation which will benefit the Nation at large. Shri Goswami, specially congratulated the students who participated and appreciated the endeavors of parents and teachers who encouraged them. He wished the students the very best in all their future endeavours.
Speaking in the event, Shri Pradeep Kumar Nayak, Additional Director, Odisha School Education Programme Authority appreciated the efforts of NTPC in successfully conducting the event. He said this would give a message to society on the conservation of natural resources.
Elaborating about the need of the Energy Conservation, Smt Soudamini Dash, Deputy Director Odisha School Education Programme Authority gave an overview of the events and how the Officers and staffs of OSEPA conducted the programme with the support of the headmasters and teachers in the state.
For the State of Odisha, NTPC Eastern Region-II Headquarters is coordinating the Painting Competition on behalf of the Union Ministry of Power in association with the Bureau of Energy Efficiency.
The Ministry of Power had launched this National Awareness Campaign in order to promote energy conservation in the country. The painting competition for students has been included as one of the activities of the campaign, which would not only make aware the students of the need for conserving energy but at the same time would educate and involve their parents.

There were Ten consolation prizes in each category.