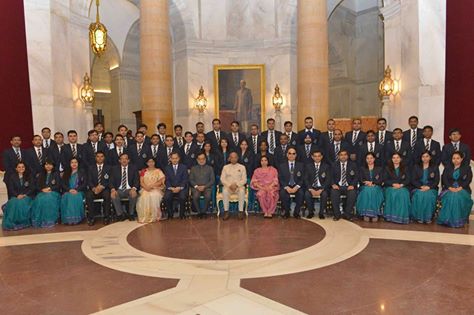 Addressing the probationers, the President said that collection of revenue is critical to the task of nation building. The revenue collected by the officers is used for the development of the country. He said that tax collection should be a smooth process and there should be minimum discomfort to the tax-payer. He advised them to remember what Chanakya had said about tax collection in the Arthashastra that a government should collect taxes like a honeybee, which collects just the right amount of honey from the flower so that both can survive.

The President said that in a sense the young officers would drive GST — which is one of India’s biggest economic reforms since independence. He stated that this is the age of globalization and technological advance. This throws up enormous opportunities for trade and investment. It also, unfortunately, creates avenues for fraud and money laundering. It is their job to promote economic activity and curb fraud. Both these goals are important. He said that the work they do has implications for India and for India’s reputation in the world — as a trusted business destination, with a fair and predictable tax regime. He asked them to be mindful of this big responsibility.

He wished the officers all success in their future career and told them that their integrity is not negotiable. A credible tax system can only be built by credible tax officers.