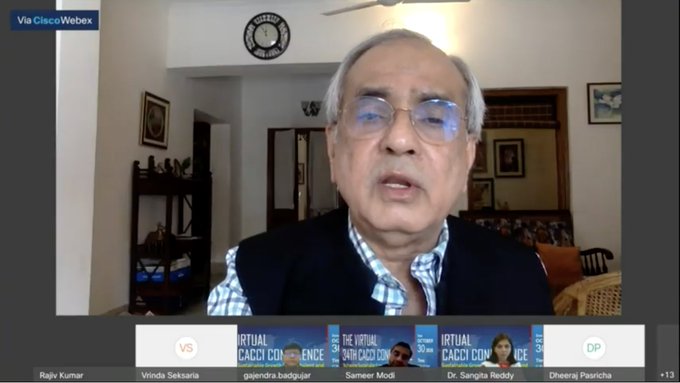 New Delhi: Dr Rajiv Kumar, Vice Chairman, NITI Aayog, Govt of India today said that the Government has taken this pandemic as an opportunity to lay foundations in some of the most critical sectors. “This govt is committed to two things — to give much greater space to private entrepreneurs, because we know without private entrepreneurs, whether domestic or foreign, we will not be able to achieve the kind of growth rates and sustainable growth rates that we want. And to this, our biggest effort is to create the trust between the government and the private sector based on which we can work together in a PPP to take matters forward”.

Speaking at the 34th Confederation of Asia-Pacific Chambers of Commerce and Industry (CACCI) Conference on Achieving Sustainable Growth in a Turbulent and Disruptive Global Market organised by FICCI and CACCI, Dr Kumar said for those that have invested in India, the government wants to recognise them by giving better logistics, much better infrastructure. To this effect, said Dr Kumar, the government has brought out the Production Link Incentive Scheme which will be valid for 9-10 sectors and the objective of which is to incentivise investors in this country to put up globally comparable capacities in scale and in competitiveness.

Dr Kumar called this scheme unique and historical in the country and said that it will be done in the global context and will be done in India trying to regain its share in global and regional production chain. “We will go forward with this in respect to the multilateral trading orders and it will not imply in any sense, any form of isolation, closed economy or protectionism. It will be catered and targeted towards creating capacities,” Dr Kumar said.

Further, Dr Kumar emphasising India’s commitment to open order, a global economy, said that India has committed to see the Asia Pacific region as a region which is thriving and where trade continues to rise. “The Asia- Pacific will be a far more vibrant driving force for the global economy,” said Dr Kumar.

We must recognise that Asia Pacific does not have the luxury of retrofitting businesses and finance our growth at the cost of our natural capital. Asia Pacific has the resilience, resources, scale and diversity and competitiveness to continue to remain the driver of global growth going forward. “I do not think that there is a replacement for the Asia Pacific region as the principal driver of growth. Organisations like CACCI are very important in making the Asia Pacific region far more connected and inter-related,” he said.

Further, Dr Kumar said that NITI Aayog has been pushing electric mobility in a strong way. “Under the Electric Mobility Mission, we have finalized the standards of charging for two and three wheelers — which constitute 85 percent of the vehicles on the street and we want to shift them to electric mobility,” he said.

Dr Kumar said that it’s time to realise the social aspects of our growth as development. “The Human Resource, its health, its welfare, education, awareness will become middle and central of our growth.” NITI Aayog, said Dr Kumar, has been pushing agendas of women and child development and health. We do not want to be caught in a situation where lives are affected,” he said.

Mr Abdul Abiad, Director, Macroeconomic Research Division, Economic Research and Regional Cooperation Department, Asian Development Bank spoke on how Asian economies would be affected by containment measures. “Developing Asia will contract by 0.7% this year, its first contraction in decades. Growth will rebound to 6.8% in 2021, but this implies only a partial recovery,” he said.

Dr Andrew Stoeckel, Honorary Professor, Centre for Applied Macroeconomic Analysis, Australian National University speaking on the challenges of restoring multilateral trading system, said that it doesn’t need a professor of economics to tell you that the world trading environment, currently, is very tough. “The open, predictable multilateral trading system is under threat and globalisation is potentially in reverse at potentially high cost,” he said.

Mr Richard Koo, Chief Economist, Nomura Research Institute speaking on the China- US trade friction and its impact on the global economy said that Japan used to be where China is today. Mr Koo said that free trade creates both winners and losers in a country. But if the trade is balanced then the gains are much larger than the losses.

Speaking at the inaugural session, Dr Sangita Reddy, President, FICCI said that the existential necessity of strong business and economy has been highlighted multiple times but despite that we did see contractions in GDP and balance sheets. “But all of us have come to the resolve that the world can, should and will find a way to emerge stronger from this crisis,” she said.

Complimenting the government’s various initiatives, Dr Reddy said that we must commend the multiple macroeconomic policy, the significant economic package, which looked at the fiscal and non-fiscal initiatives. “All policy statements by the government continue to say that there will be more fiscal stimulus as and when required. The government has again committed to reenergise the economy to stay on track of creating a $5 trillion economy,” she said.

Mr Samir Modi, President, CACCI & Executive Director, Modi Enterprises said that this virtual CACCI conference aims to examine current developments, challenges, and disruptions, market environments and the geopolitical landscape and how these impact economies and business operations. “Discussions will centre around how Asian economies are being shaped by COVID-19 containment measures and beyond, challenge of restoring the multilateral trading system,” he said.