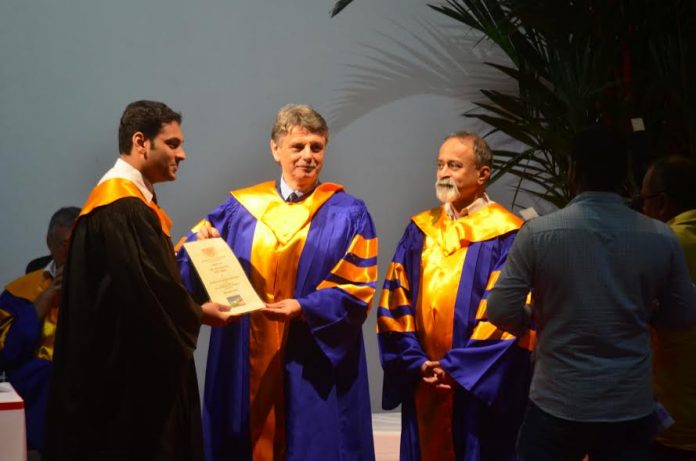 Sanquelim: Goa Institute of Management (GIM) one of the premier B-Schools in India, hosted its annual Convocation Ceremony for the PGDM batch of 2015 -17 at its sprawling campus in Sanquelim, Goa. Students turned professional managers received the coveted diploma after having completed over 22 months of academically packed, rigorous training with exposure to live industrial projects as well as community oriented assignments.
A total of 271 students were awarded their diplomas at the convocation ceremony. While 216 are full-time PGDM students, 30 are from the part-time MBA program and 25 students are from the Post Graduate Diploma in Healthcare Management program (PGDM – HCM).
The event ceremony was presided over by Prof. Dr. Ralf Speth, CEO, Jaguar Land Rover PLC, UK who delivered the convocation address. Dr. K Balakrishnan, Director, GIM and Mr. Nasser Munjee, Chairman, GIM along with other members of the Board of Governors, students and faculty members of the institute were present.
The 17th Convocation ceremony at GIM began with the Director’s Report on the institute’s performance for the last academic year, highlighting the achievements of the B-school and its students. The students of GIM proved that they are the products of one of the best in B-schools across the country with placement offers from some of the top companies in India which included Goldman Sachs, Citibank, Deloitte, D.E. Shaw, HUL, Infosys, Cognizant, PWC, E&Y, KPMG, WIPRO, Tech Mahindra and Amazon. IT, Consulting and FMCG companies among others. Most of the students have received lucrative placement offers.
Mr. Nasser Munjee, Chairman of the Board of Directors handed over the diplomas and special awards of merits to deserving students. Said Mr. Nasser Munjee, Chairman, Board of Directors, “A constant process of learning and adaptation is what is required in the world out there. Your PGDM course is not the end; it’s just the beginning of a new chapter. The changing environment would need you to keep learning more and more with time. Apart from learning, it is also your character that will get you through life and to build a strong character it requires three important components which are integrity, caring for the world and sharing as much as you can with others. But at the same time don’t forget to contribute to yourself and family first before you start contributing to your corporate career.”

Taking a page out of Jaguar Jaguar Land Rover PLC, success story, Prof. Dr. Ralf Speth, CEO, Jaguar Land Rover PLC, UK said during the convocation address, “The pace of technological development is hastening a new industrial revolution. It’s just getting bigger and wider than any other revolution in the past. And at the same time the political and economic turn offs make planning even more difficult than it has been for decades. At Jaguar Land Rover we’ve experienced insurability before. Some years ago we faced a real possibility of closure and now we are the biggest car manufacturer in the United Kingdom, the premium brand that is respected across the world.”