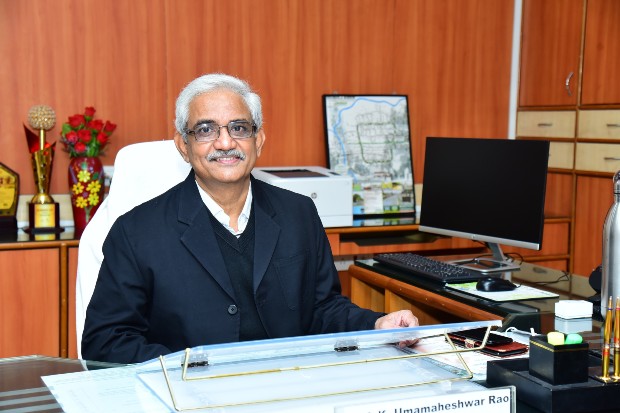 ROURKELA : Professor K. Umamheshwar Rao has assumed office as the new Director of NIT Rourkela on 18th February 2022. He will be succeeding Prof. Simanchalo Panigrahi, who was appointed as the interim director in October 2021.
Prof. K. Umamaheshwar Rao was previously serving as the Director of the National Institute of Technology Karnataka (NITK), also known as NIT Surathkal. Before joining here, he was a faculty for almost three decades at IIT Kharagpur. Some of his important portfolios include Chairman (Estate), and Vice Chairman of Joint Entrance Examination (JEE). He was also the Head of the Mining Engineering Department during 2006-08 and 2010-14.
Highlighting his priorities for the Institute, Prof. K. Umamaheshwar Rao, Director, NIT Rourkela, said, “NIT Rourkela is a pride entity of Orissa. The Institute’s rank in the NIRF Ranking matters today. Time has come to redefine our objectives and work towards them with determination, required skills, and strategies having foresight vision for the exponential growth of the Institute. Our accomplishment towards the goal starts now.”

Further, Prof. K. Umamaheshwar Rao said, “The expectations of the industry from the students are to have the 21st-century skills and sufficient knowledge in the niche areas like Internet of Things (IoT), Artificial Intelligence (AI), Big data analysis, 3D printing and additive technology in manufacturing. These expectations have to be taken care of with a lot of involvement from the Institute. It is the time for the creation of Career Development Centre instead of Training and Placement Cell, whose objective is to create opportunities for students to upgrade their career skills, soft skills and technical skills.”

According to various national and international ranking agencies, NIT Rourkela is the top NIT of the country when it’s come to research profiles. Prof. K. Umamaheshwar Rao also aims to bring NIT Rourkela in the top 10 in the NIRF rankings by focusing on different parameters such as number and quality of publications, financial resources and utilization such as creating facilities for students, which include laboratories, libraries, etc., and faculty-student ratio.

The newly appointed Director aims to improve research and innovation infrastructure with the help of faculty and students to make NIT Rourkela a campus of the first choice. He would also work towards increasing multidisciplinary quotient in curriculum with special emphasis given to environmental and value-based education.
Congratulating his successor, Prof. Simanchalo Panigrahi, the outgoing Interim Director of NIT Rourkela, said, “NIT Rourkela is founded in the rich land of Ratnabhava (land rich in resources). Our state shares a major part of the country’s mineral reserves. Mining being the primary profession here, the new Director is not only an asset to the Institute but also to the state.”

Day-V of National workshop on “Hands on Training on…

Prof. K. Umamaheshwar Rao’s field of specialization is experimental rock mechanics and he has been working in this area since 1989. He has guided six PhD candidates with another 12 research scholars in the advanced stage of research under his supervision for their doctoral degrees.

In previous year, NIT Rourkela has added four new Centre of research which includes Centre for Poverty Alleviation and Research, the Centre for Excellence on Public Health Nutrition, the Centre for Bioinformatics and Computational Biology (CBCB) and Space Technology Incubation Centre and now the Institute will soon have a Centre for IoT and Embedded Technologies (CIET).

Prof. K Umamaheshwar Rao is a graduate in Mining Engineering from Osmania University, Hyderabad. After working in various mining industries for a total period of around three years, he joined the Indian Institute of Technology Banaras Hindu University (IT-BHU) for a Master’s in Engineering. He acquired his MTech in Mining Engineering in 1987. He obtained his Ph.D. in the field of Rock Mechanics from IIT Kharagpur.
The previous full time Director, Prof. Animesh Biswas joined in 2016. His first imitation towards for betterment of the institute started with maintaining student-specific growth and for the same Institute Counselling Service keeping in mind the care and growth of mental growth of the students.
With 20 academic disciplines, NIT Rourkela is offering state-of-the-art undergraduate, postgraduate, doctoral and modular programmes in multi-disciplinary and emerging areas. NIT Rourkela is one of the few institutes which have departments like Food process engineering, Ceramic Engineering, Earth and Atmospheric Sciences, Industrial Design, Life Science, and Management. Besides this, there are six Academic Centres and nine Centres of Research, two of them recognised as Centres of Excellence by external Government agencies.
With the ongoing project, Sports and Cultural Complex at NIT Rourkela will facilitate various indoor sporting within the campus and may conduct national/international tournaments. The Open-Air Theatre with 1000 seating capacity at this complex will nurture the student and regional artists to showcase their culture and art. While, Foundation for Technology & Business Incubation (FTBI) at the Institute houses 54 incubated start-ups, 30+ pre-incubation teams.
NIT Rourkela is also a part of pilot program ‘Gender Advancement for Transforming Institutions’ (GATI) launched by the Department of Science and Technology, Govt. of India and is working for Gender Equality in the fields of Science & Technology. It has established a Space Technology Incubation Centre (STIC) in collaboration with ISRO which will cater all five states comprising of Odisha, West Bengal, Bihar, Jharkhand and Andaman and Nicobar.