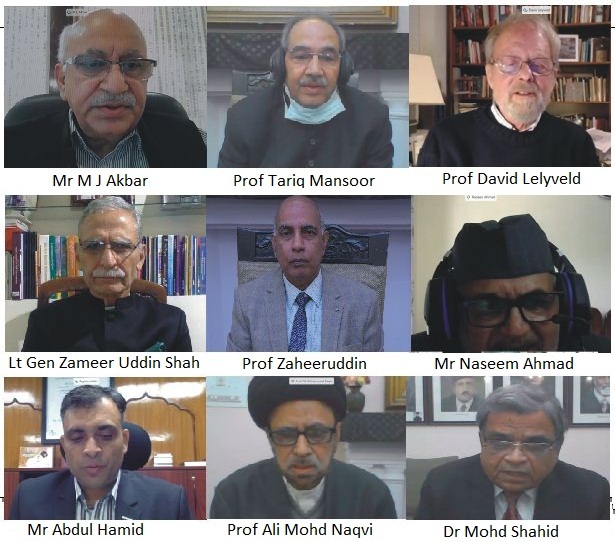 Aligarh: Noted scholar and the author of ‘Aligarh’s First Generation: Muslim Solidarity in British India’, Prof David Lelyveld today meticulously located the history of the Muhammadan Anglo-Oriental (MAO) College and its transformation into the Aligarh Muslim University (AMU), in the perspective of Muslim cultural identity in India in the nineteenth century, and the changes it underwent, in the context of colonial rule.

Explaining the history of AMU in a multiple time frame analysis, Prof Lelyveld described how the period from 1870-75 saw the landmark developments such as Syed Mahmud submitting the plan of a proposed university in the MAO College Fund Committee meeting in 1873 among other important events.

He discussed how the years 1875-1898 were about Sir Syed ‘s remarkable leadership and the year 1920, when Muhammadan Anglo-Oriental College became Aligarh Muslim University, following the Gazette Notification.

He said that Sir Syed introduced a new energy and a notion of progress to change the common people.

“Sir Syed had an interdisciplinary perspective. He was a modernist with religious thoughts, a proponent of both scientific and historical learning and a social reformer, who laid the foundation of scientific education with the establishment of MAO College, now known as AMU that continues today as one of India’s premier universities,” said Prof Lelyveld.

He further spoke how Sheikh Abdullah, after whom AMU Abdullah College was named, pressed for women education and wrote many articles in different journals.

“Sheikh Abdullah started a monthly womens’ magazine and in order to start a school for girls. In 1906, he managed to start a girl’s school and after a lot of struggle, Sheikh Abdullah and his wife Waheed Jahan Begum finally succeeded to lay the foundation stone of the first girl’s hostel in 1911,” said Prof Lelyveld.

Prof Leyveld emphasised the role played by former President of India, Dr Zakir Husain in taking AMU forward and in shaping the education system of the country.

The Chief Guest, Mr M J Akbar, Indian journalist and politician, who served as the Minister of State for External Affairs and is currently a Member of Parliament in the Rajya Sabha said that AMU is a living institution representing Sir Syed’s perception of future.

“Sir Syed, who was born in the last years of the Mughal era and died during the peak of the British Raj, knew how to move a community out of nostalgia and this became his mission,” said Mr Akbar.

He added: “Sir Syed tried to change Muslims and Hindus with the instrument of education. His commitment was not sectarian and he believed that patriarchal system needed to be eliminated.”

Sir Syed promoted equality and welfare of the all Indian citizens and believed in non-violence, said Mr Akbar adding that he saved a British family during the unrest followed by 1857 Mutiny.

He pointed out that Sir Syed stressed on gender reforms and economic emancipation.

“On his England visit, Sir Syed saw a maid reading a newspaper, which left a deep impression on him. He wanted to bring the western gender reforms to India to tread the path of Western progress,” pointed out Akbar.

General Shah added that he took inspiration from the life and works of Sir Syed and became a part of the second Aligarh Movement, focussed to establish a chain of modern and secular schools.

“We have already established three such schools and fourth one will be operational soon,” said General Zameer Uddin Shah.

He urged students to utilise their time and to focus on areas such as nano technology, artificial intelligence and robotics, while maintaining the ethos of Ganga-Jamuna Tehzeeb (Culture).

Former AMU Vice Chancellor and civil servant, Mr Naseem Ahmad said that Sir Syed as the leading light of the wider Aligarh Movement established a base, and an impetus for education reform.

He added that the Aligarh Movement had a profound impact on the Indian society and influenced a number of other movements to a great extent that it caused the emergence of other reform movements during the 19th century.

“Sir Syed realized the importance of modern education and believed that education alone will help to reach the cherished goal of development, peace, harmony and political stability of people,” said Mr Naseem.

He pointed out that Sir Syed stood for reformation and transformation of society to modern ideas, especially to the backward Muslims in general and to the common Indians in particular.

“Sir Syed was a reformist and progressive thinker of his time. His main contribution and relevance to the present day is his belief in multiculturalism where all communities irrespective of any caste or creed must be allowed equal status and to live in harmony,” said Mr Naseem.

“Since its inception, AMU has been making seminal contributions to different branches of knowledge and has played a major role in Nation building. We stand proud that AMU is included amongst the top ranked Indian universities due to the concerted efforts of its faculty and focussed research of its scholars,” said the Vice Chancellor adding that it is time for minorities, especially Muslims for a new thought process, which should involve dialogue and adjustments.

JNMC hospital is the first institution to complete enrollment of 1000 volunteers for Phase III Covaxin trials sponsored by ICMR and Bharat Biotech, said the Vice Chancellor.

In the welcome address, Prof Ali Mohammad Naqvi, Director, Sir Syed Academy said that the two-day programme will have paper presentations from experts and researchers from various fields.

AMU Registrar, Mr Abdul Hamid (IPS) thanked the keynote speaker for the thought provoking lecture, while Dr Mohammad Shahid, Deputy Director, Sir Syed Academy extended the vote of thanks to all the guests.