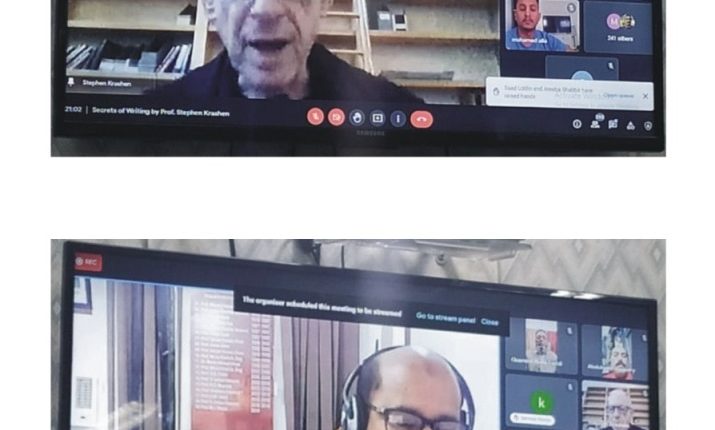 Aligarh : “How can you possibly produce outstanding outputs if you don’t use the best raw materials and inputs? Read the best books you can get your hands on, and don’t be afraid to reread them”, asserted American linguist, educational researcher, political activist and professor emeritus at the University of Southern California, Dr Stephen D Krashen in a web talk on ‘Secrets of Writing’ of the Department of Linguistics, Aligarh Muslim University (AMU).

He added: “We don’t acquire language by study, and we don’t become better writers by writing more. Input counts, not output. But actual writing can help us solve problems and make us smarter. This happens largely through revision, rereading what we have written and making improvements”.

Quoting Peter Elbow, ‘Meaning is not what you start with, but what you end up with’; Prof Stephen stressed that revising and rereading make way for improvements and allows one to examine important aspects of writing.

“Those who read more, write better: they spell better, have larger vocabularies, better grammar and a more acceptable writing style”, he said.

Prof Stephen elaborated how spare and direct the famous author, Ernest Hemingway was and how he often worked through multiple drafts.

Further elucidating the importance of ‘Revision’ for writers, he pointed out that Charles Darwin once said, ‘I cannot remember a single first formed hypothesis which had not after a time been given up or greatly modified’.

He urged budding writers to engage in good reading and rereading, revising the drafts, planning and re-planning whenever necessary, taking short breaks between work, daily writing, coming up with original ideas and reading what is required as bulk reading leads to the habit of forgetting.

He stressed on keeping the introduction short and not to get upset with rejections.

“Take all the data that has been published and reanalyze it and be ready for unobtrusive measures”, said Prof Stephen.

He concluded the talk by saying that scientific information should be free for the common good.

In the welcome address, Prof M J Warsi, Chairman, Department of Linguistics spoke about the thrust areas of Prof Stephen.

He said: “Prof Stephen specialises in theories of language acquisition and development. Much of his recent research has involved the study of non-English and bilingual language acquisition. Since 1980, he has published well over 100 books and articles and has been invited to deliver over 300 lectures at universities throughout the United States and Canada. Known for the theory, ‘Comprehension Hypothesis’, Prof Stephen is one of the most frequently cited scholars in the field of Language Education”.

Prof Imtiaz Hasnain moderated the Question and Answer session, while Dr Nazrin B Laskar extended the vote of thanks.