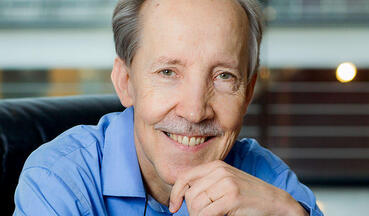 Research Director, Professor Emeritus Kari Alitalo has been conferred the honorary title of Academician of Science.
Kari Alitalo’s main areas of research interest include the pathophysiology of cancer, particularly the role of lymphatic vessels in tumour metastasis, and the development of more targeted therapeutic strategies to prevent the growth and spread of cancer. He has identified several new growth factors and receptors that regulate the development of the vascular and lymphatic system.

Alitalo is Director of the Wihuri Research Institute (WRI), which hosts seven different research teams that are studying the pathogenesis of cardiovascular and lymphatic diseases. Current WRI projects include investigations into how elevated lipid levels in the bloodstream, obesity and associated metabolic disorder, and tissue inflammation affect the vascular system and the development of many diseases.

Alitalo is also Scientific Director of the iCAN Digital Precision Cancer Medicine Flagship, which brings together cancer scientists, partners from the biomedicine and medicine sector and other actors. The iCAN Flagship is aimed at developing new, more targeted cancer therapies.

Alitalo says that as far biomedical researchers are concerned, the current pandemic situation has brought along a number of changes that affect both the practice of research and the role of scientific knowledge in society and public decision-making.

University of Copenhagen: Large, economic wheels must be…

University of Copenhagen: Lockdowns did not significantly…

“In the pandemic, the scientific community has hit the ground running and through its networks put its wide-ranging expertise to the best possible use at the most critical stages. Scientific knowledge has pronounced importance for decision-making at critical times, and it requires that the conclusions of research are put into practice regardless of the political turmoil and that the message is accurately delivered in global communication,” Alitalo comments in a press release of the Academy of Finland.

Alitalo has published more than 500 original scientific articles in the fields of biomedicine, cancer research, molecular biology and cell biology. All told, they have received more than 80,000 citations. Alitalo has received numerous domestic and international honours and awards, including the Anders Jahre Senior Medical Prize in 2010 (Norway); the Finnish Science Award in 2013; and the Antonio Feltrinelli Prize in 2019 (Italy).