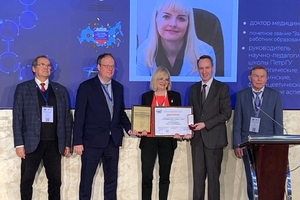 On September 28, within the framework of the Professors’ Forum 2021 “Science and Technology in the 21st Century: Trends and Prospects”, the ceremony of awarding the national awards “Professor of the Year” and “Dean of the Year” was held. Among the laureates of the “Professor of the Year” award – Professor of Petrozavodsk State University, Doctor of Medical Sciences, Head. Department of Pharmacology, Organization and Economics of Pharmacy of the Medical Institute of PetrSU, Head of the Laboratory for Preclinical Research, Cell Pathology and Bioregulation of the Institute of High Biomedical Technologies of PetrSU, Head of the Scientific and Pedagogical School “Biological, Medical, Pharmaceutical and Social Aspects of Gerontology” Irina Anatolyevna Vinogradova.
The Russian professors ‘meeting under the auspices of the Ministry of Science and Higher Education of the Russian Federation is currently holding the Professorial Forum 2021 “Science and Technology in the 21st Century: Trends and Prospects” dedicated to the Year of Science and Technology, as well as timed to coincide with the 5th anniversary of the Russian Professors’ Meeting.

I.A. Vinogradova took part in the Plenary Sessions of the Professors Forum 2021 “Science and Technology in the 21st Century: Trends and Prospects”, which were held in a mixed format.

Within the framework of the forum, I.A. Vinogradova made a presentation on the topic “Transformation of higher medical education in the context of digitalization.”