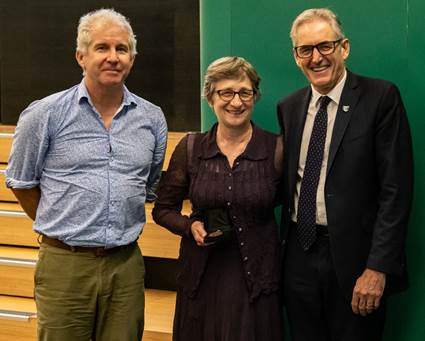 New Delhi: Professor Martha Savage from Te Herenga Waka—Victoria University of Wellington ‘s School of Geography, Environment and Earth Sciences (SGEES) has been awarded the 2020 Marsden Medal by the New Zealand Association of Scientists (NZAS) for her pathbreaking research in the fields of seismology, plate tectonics, and volcanology.

Professor Savage was surprised and delighted to hear she had been awarded the medal. “It’s a great honour to be recognised by the New Zealand Association of Scientists and to know the work I’ve been doing over the past 35 years has been valuable. I would not be where I am today without the hard work of the many mentors and colleagues I’ve had over the years,” she said.

“In her pioneering work, Professor Savage used remotely sensed texture—seismic anisotropy—of rocks deep below the Earth’s surface to fundamentally change how plate-boundary processes are studied and understood. The observations at the heart of her work, separation of seismic waves into components that travel at slightly different speeds, are due to rock textures and once detected those textures reveal how tectonic plates move and respond to stresses built up within them.

University of Johannesburg: UJ first university in SA to…

“She has conducted comparative studies of deep crustal and mantle properties and processes in New Zealand and the western United States, investigated the relationship between time-varying anisotropy and volcanic eruption sequences, and developed new observational approaches and new computational methods to interpret seismic data. Her work showcases New Zealand as a rich natural laboratory in which to develop globally relevant geophysical methods and process understanding.

“Professor Savage was also a pathbreaker as the second woman to winter-over in Antarctica. Her Antarctic work was focused on cosmic-ray observations at Amundsen-Scott South Pole Station, but she credits it to have also allowed her to learn about the importance of personal character and positive, supportive relationships in science.”

SGEES Head of School Professor James Renwick says the medal is well deserved. “Professor Savage has worked tirelessly on improving our knowledge of seismic activity, plate tectonics, and volcanology in New Zealand and throughout the world for more than 35 years. She is a respected scientist and thoroughly merits this recognition for her dedication and achievements.”

She has also been a strong activist for improving mental health care, dedicating her time to campaigning against the use of mechanical restraints and to improving psychiatric care.

Professor Savage was made an Honorary Member of the World Psychiatric Association in 2020.

RWTH: Presentation of the Christian Patermann Prize 2022 to Sandra Venghaus and Till…

iednewsdesk May 20, 2022
The University of Johannesburg’s (UJ) College of Business and Economics (CBE) School of Accounting (SOA)…

RWTH: Presentation of the Christian Patermann Prize 2022 to Sandra…