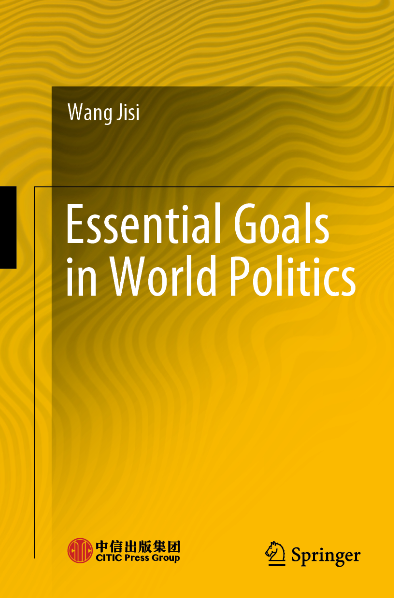 Peking : Peking University Professor Wang Jisi recently published a monograph entitled Essential Goals in World Politics.
This book presents a unique effort to apply political philosophy to realities of the world. Among numerous objectives that states, politicians, and individuals try to reach, some are vague, like power, interest, and happiness. Some others, like democracy, order, and rule of law, are ways and means to serve more fundamental purposes. While national reunification is seen as prerequisite on the political agenda of the People’s Republic of China and both South and North Koreas, and religious purity is regarded as essential to many Muslim communities, these are not universally accepted principal goals in the world.

The author identifies and defines security, wealth, faith, justice, and freedom as five ultimate goals in world politics and explains why they are central. Without jargons and using many cases in China and other countries, the author illustrates that different countries at different times have varied priorities in their national politics, but they must provide security, sustain economic growth, set up a value system, maintain social justice, and secure personal freedom for their citizens. Although the world today has been relatively peaceful and accumulated much more wealth as compared to the past centuries, vacuums of faith and morality, conflicting beliefs, and lack of social justice are threatening mankind.

In theory, the five ultimate goals should be reached simultaneously and reinforce each other. However, in practice they are often in contradiction. For example, national security might be strengthened at the expense of prosperity, and industrialization for economic growth has sacrificed nontraditional security interests such as the environment. The accumulation of wealth often results in its unequal distribution and grievances about injustice, and freedom and equality are regarded by some political thinkers as “natural enemies” to each other. A virtuous state should be able to reach all the five goals, while a bad state may not have even one of them.

Looking around the world today, Denmark in Europe and Japan in Asia are closer to a virtuous state than most other countries despite their own deficiencies, but they are generally homogeneous in terms of ethnicity and culture. Singapore, with its ethnic diversity, has to limit freedom to obtain other goals. This book compares the development paths of China, the United States, and some other countries to demonstrate their advantages and disadvantages in becoming a better polity.

Wang Jisi is President of the Institute of International and Strategic Studies and Professor and former Dean of the School of International Studies at Peking University. He was on the list of “Top 100 Global Thinkers” twice (2005 and 2012) selected by the Foreign Policy magazine for his interpretation of China’s strategic thinking. He published numerous works on global politics, China’s foreign relations, and U.S. foreign policy.