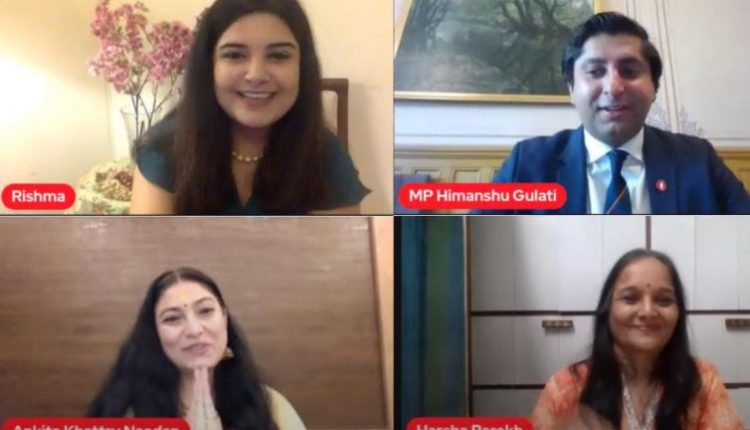 Proud to be Born in Norway but Indian Heritage has Influenced My Soul, says Young Globetrotting Norwegian Politician Himanshu Gulati

Kolkata: “My Indian heritage is an integral part of me. I am proud to be born in Norway and being a Norwegian but my soul, the way I think, the way my views have been shaped, is very much influenced by my Indian heritage and I try to stay very closely connected to India,” said Young Achiever and Norwegian politician Himanshu Gulati at a virtual session of Ek Mulakat Visesh series of inspiring talks from his chamber inside the Norwegian Parliament.

The Ek Mulakat Visesh session was organised by Prabha Khaitan Foundation of Kolkata and presented by Shree Cement. Himanshu was in conversation with Rishma Gill of Ehsaas Woman of Chandigarh and was joined in by Harsha Parekh of Spectrum, Pune Chapter, social activist and member Ehsaas Woman of Varanasi, Ankita Khattry Nadaan and scores of curious audience from all over India.

“I try to stay very much connected to India by watching news everyday, listening to Indian music, movies and visiting India as much as I can. It also gives a perspective. India represents almost one-fifth of humanity and with the historical weight the Indian culture carries through mediation, yoga, scriptures, India gives a bigger perspective than living in a small country like Norway,” Gulati said.

Himanshu Gulati’s parents immigrated to Norway in the late 70s and started from scratch.1988-born Himanshu Gulati is a member of parliament from Norway representing the Progress Party. He became the youngest state secretary in Norwegian parliament at the age of 25 in 2013 and served as a Deputy Minister of Justice. For three years he served as a Deputy Minister State Secretary in the Prime Minister’s office. Mr Gulati has travelled to more than 160 countries. He has directed an International Art House feature film, starred in several cinemas and documentaries and also participated and hosted shows on Norwegian television. Himanshu was awarded Pravasi Bharatiya Samman Award in 2019 by the President of India at a function in Varanasi.

On being asked what it is like to be one of the youngest members of Parliament?

Himanshu said, “I am truly very grateful for the opportunity to have high positions of office in politics at a young age and although it is lesser common in India, I am lucky that in Norway is not completely uncommon for people below 30 to be Members of Parliament or be Deputy Ministers and I think it is important in every society that people of all ages, and the younger ones, have their voice inside politics and play a part in how society is shaped. So I think it helps to create better policies if all age groups are represented.”

Commenting on the challenges he faced climbing the political ladder, Gulati said, “I have been able to ascend high in politics at a young age. The challenges you face as an outsider being so young in politics is that people underestimate you. I think that is a challenge people face everywhere. When somebody stands out in a different way, people underestimate you. But we live in a world where what you do and your input is more important than who you are. That is one of the reasons I could also be where I am.”

Alluding to his parents’ humble origins in Norway, Gulati said, “My parents like a lot of people who left India in the 70s-80s for Norway and started with two empty hands. My father, being an educated doctor, and my mother a physiotherapist. I am very grateful to them. Me and a lot of people who had been born to Indian parents abroad and got opportunities were served down silver platters while people who really did the hard work were our parents’ generation. I am just a small example.”

“Indians, wherever they travel, are very good at preserving their culture. Although living away from India, my parents, like millions of other Indians abroad, closely watched Bollywood films, listened to Indian music, not just they made Indian food for themselves but for all the neighbours and themselves and sort of became ambassadors of Indian culture. Indians are very good at exporting their cultures to others,” Himanshu said.

Responding to a question about his experiences of having travelled to over 160 countries, Himanshu said, “Travelling is the true passion of my life and I urge everybody to travel as much as possible. I travelled a lot within India also and was fortunate to see all parts of the country. Travelling truly expands one’s horizon and also teaches one that the world is not black and white. The world is full of nuances and people all over are very different in culture. I have travelled to some dangerous parts of the world like North Korea, which is one of the most isolated countries in the world. I was recently in Yemen, Syria, Afghanistan, Iraq and also have participated in several personal initiatives to help Norwegians stranded abroad to come home. So I do travelling for my own soul and as a hobby.”

Expressing his views on India-Norway relationship, Himanshu said, “Norway is a small country but you could say it has super powers in certain fields when it comes to energy, gas, oil, fisheries and so on. Both India and Norway can increase trade. I think this great potential for Norwegian and Indian technologies go both ways. I think India offers Europe and Norway something more than just commodities. It offers the habit of yoga, meditation and sort of the inner aspects I know Norwegians are very inspired by. So it is always my effort to try to create a close relationship between Norway and India.”

Recounting his experience of receiving the Pravasi Bharatiya Samman Award, Himanshu said, “It was an out of the world experience and for the motherland of my parents to honor the children of somebody who left India 40 years ago. Personally, to receive the Award from the President and Prime Minister was one of the greatest honors of my life and something I will never forget.”